Exec Connect Live video highlights: Data for progress, Comms driving ESG, and a new Reputation Ranking
The Signal AI Blog > ByteDance: The tech unicorn you have’t heard of and why

ByteDance: The tech unicorn you have’t heard of and why 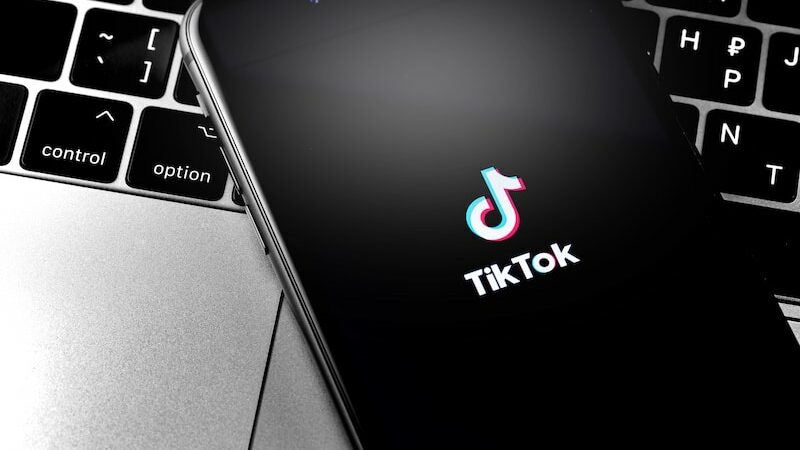 Which company is the world’s most valuable tech unicorn?

Apple, Microsoft, Amazon, AirBnb, Uber, and even Tinder all have something in common. They began as valuable startups and have grown into infamous tech giants or popular tech unicorns. But who is the world’s most valuable tech unicorn? The one you didn’t know that you’ve never heard of?

Here are some clues:

The answer is ByteDance.

Founded by tech entrepreneur Zhang Yiming in 2012, the Beijing-based company specialises in Artificial Intelligence (AI) and operates a range of content platforms. With its IPO on the way as early as this year, why haven’t we heard about them?

One simple answer is that ByteDance doesn’t get that much press.

Using Signal AI‘s media monitoring platform, powered by industry leading AI and real-time translation of content in over 80 languages, we looked into the data of ByteDance’s media coverage. We compared ByteDance to the rest of the world’s top 10 biggest unicorns (private companies with a valuation over $1 billion USD) over the past 12 months. And there is a clear discrepancy between a company’s valuation and the attention it receives. 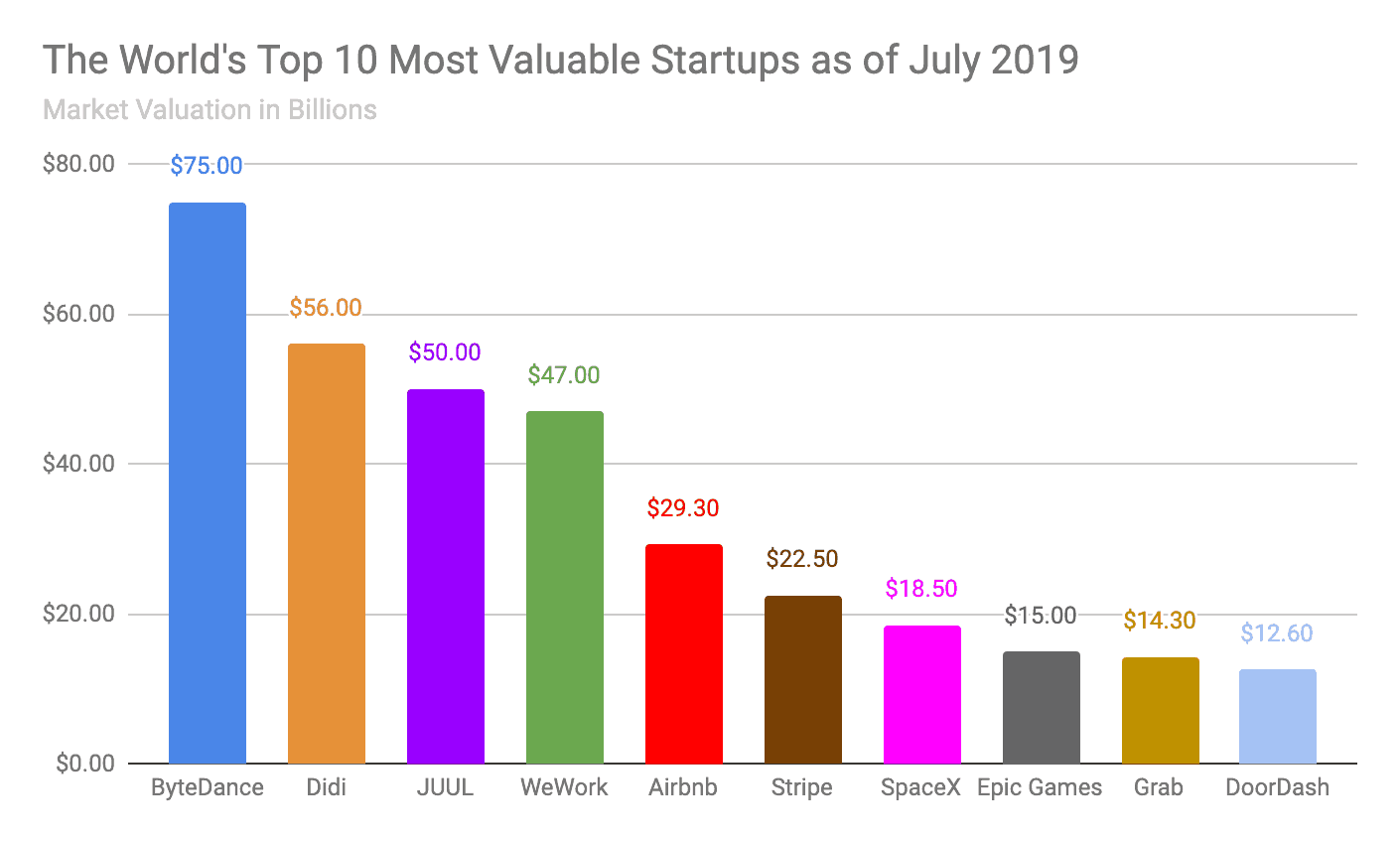 The World’s Top 10 Unicorns as of July 2019 according to CB Insights.

Out of over one million articles, ByteDance was mentioned in less than 10% of them, while Airbnb and SpaceX each have more than one-third of the articles talking about them.

Of course, who doesn’t love to travel and “belong, anywhere”, or “wake up in the morning and think the future is great” as humans become a multi-planetary species? But this still doesn’t fully explain the sheer level of discrepancy.

Number of articles published about the World’s Top 10 Unicorns from Signal AI.

One reason for the imbalance may be bias, considering there are more western media outlets sampled in the dataset. However, when comparing western media with its Chinese counterparts, ByteDance still seems to have a rather low-profile.

ByteDance, together with group-buying service Meituan-Dianping and ride-hailing firm Didi Chuxing, has been dubbed as TMD. The new generation of China’s uprising tech giants as opposed to BAT –  Baidu, Alibaba, and Tencent, China’s established tech titans that sprang up in the late 1990s.

Number of articles on BAT & TMD in the last 12 months.

While some claims it’s time to forget about BAT, all three internet companies are continuing to dominate China’s tech scene and global media attention. Now valued at a combined $1 trillion USD, BAT receives far more coverage than challenger organisations. And Alibaba and Tencent, who have more of a global outreach, receive significantly more coverage from media outlets worldwide.

Staying off the radar might have worked in ByteDance’s favour. Being underestimated by the global tech community, ByteDance has managed to grow at a tremendous speed. And independently, rather than taking money from any of the BAT group.

It’s a well-known tale that in 2016, when asked by one of his executives about rumours that Tencent was going to acquire ByteDance, ByteDance founder and CEO Zhang Yiming replied: “I didn’t found ByteDance to become an employee of Tencent.”

Making money primarily from advertising on its platforms, ByteDance demonstrates an astonishing ability to monetise and scale. This has attracted renowned investors such as Sequoia Capital, Bank of China, and Morgan Stanley. Resulting in their latest financial backing from SoftBank Group, KKR & Co. and General Atlantic, in a $3 billion USD round of funding in October last year. In which they managed to beat Uber to become the world’s largest tech start-up.

Its CEO Zhang Yiming has also risen to No. 70 in Forbes’ 2019 Billionaires List. 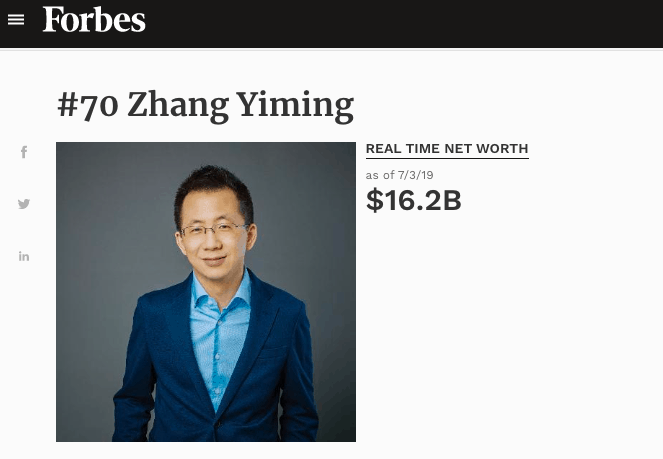 While ByteDance is worth noticing, it’s not your fault that you’ve missed the ByteDance boat. We all did. As a matter of fact, many Chinese people are not familiar with the term “ByteDance”, as the company is more known as “Jinri Toutiao” or “Toutiao” (T in the TMD) in China.

Jinri Toutiao, translated to “Today’s Headlines”, is the name of the company’s first product and flagship news aggregator app. Based on algorithmic content distribution, the app works similarly to Facebook’s Newsfeed. It pushes an endless and tailored feed of articles and videos to the users’ interface, allegedly produced by over a million content providers.

Launched in August 2012, Toutiao gained increasing popularity throughout the years. By 2018, the flagship product claimed to have over 100 million daily active users and an average engagement time of 74 minutes per day. It’s almost 50% more than the average time spent on Facebook and double the daily views that BBC Online receives globally. 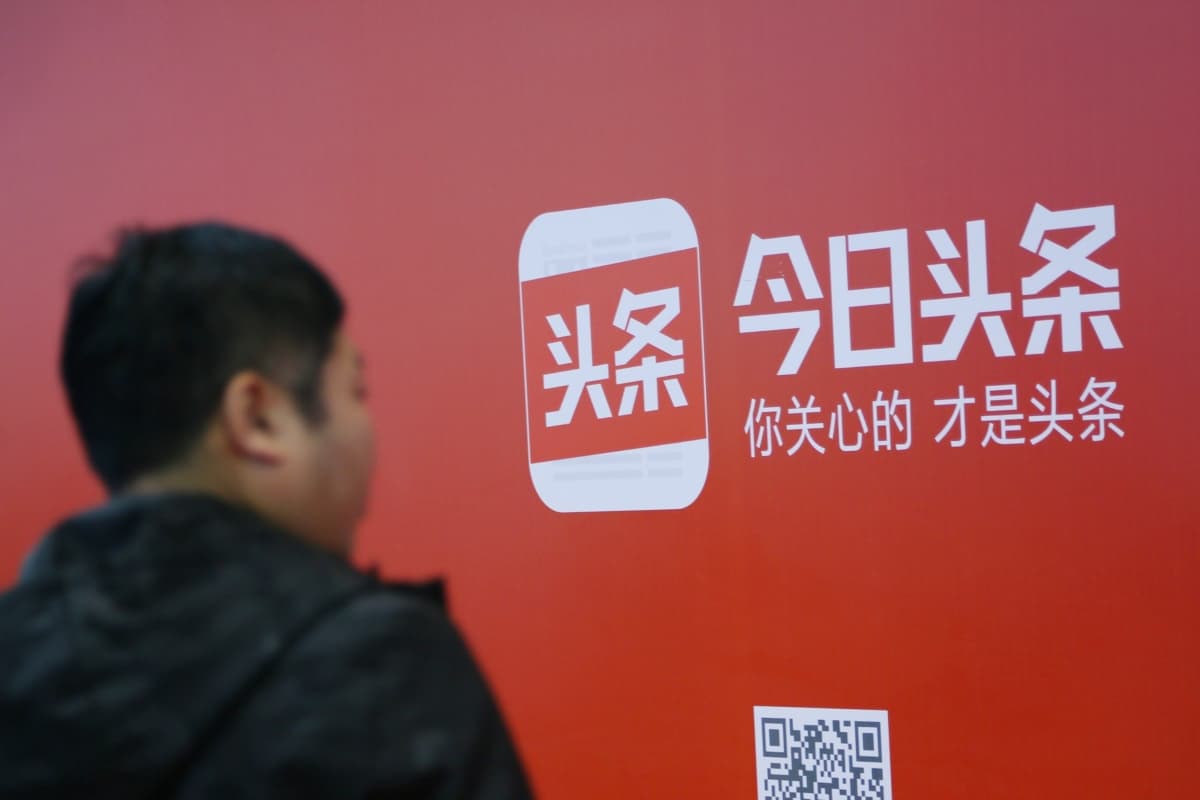 Toutiao’s slogan “The only true headlines are the things you care about.”

Widely known by the app’s name Toutiao in China, interestingly the company was registered as ByteDance from the beginning. The ‘name change’ came as late as April 2018. Prior to that, at the company’s official events, Zhang Yiming was still being presented as the CEO of Jinri Toutiao.

The rebranding move is reminiscent of the move from Alphabet to Google in August 2015, when the tech giant reconstructed itself. Supposedly in order to “take a long-term view” and to start “getting more ambitious things done.”

It’s also been seen as an effort to distance itself from the constant bad press that “Toutiao” keeps getting. The company was repeatedly sued for copyright and content ownership issues. It was ordered to suspend services by Chinese regulators due to “vulgar content.” And there is this never-ending drama about Chinese censorship. 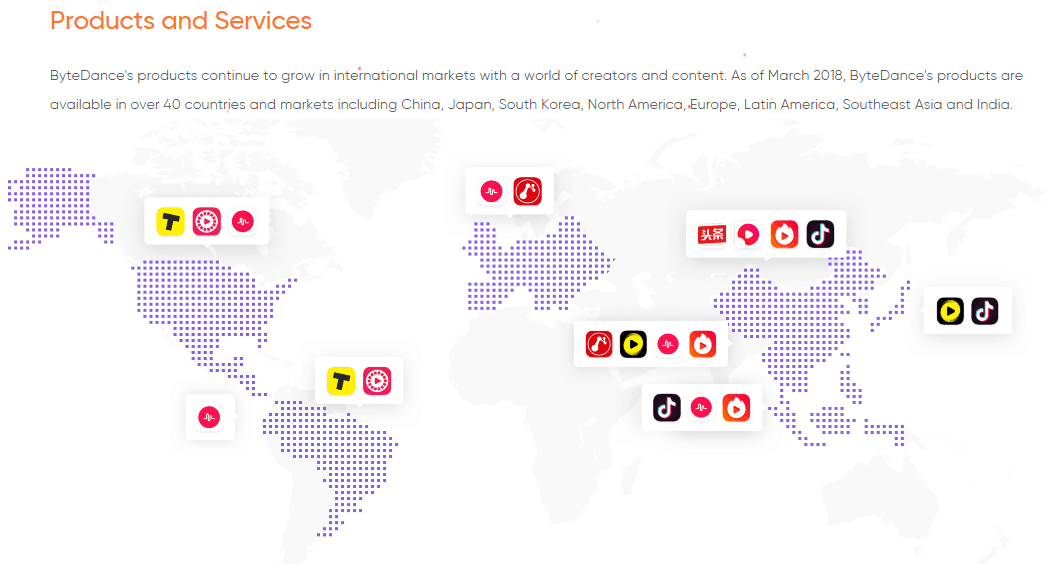 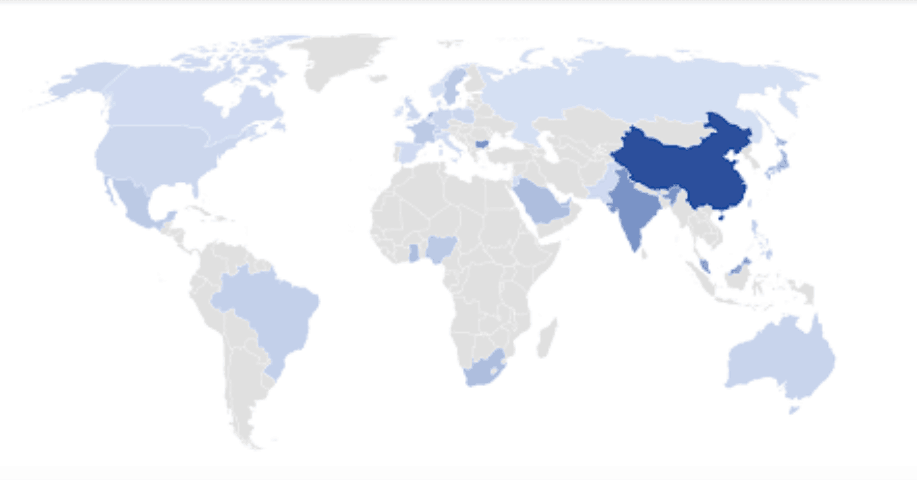 Acquisition: The road to success

Nevertheless, through a series of smart acquisitions and strategic expansion, ByteDance has evolved into a global player beyond China.

It launched news aggregator TopBuzz in 2015, to target the North American and Brazilian market. It also invested in news app Dailyhunt in India in October 2016. And with yet another tactical move in December 2016, it became a controlling stakeholder of BABE in Indonesia.

Since debuting two years ago, TikTok has garnered 1.2 billion downloads worldwide. Its popularity has skyrocketed as users, mainly teens, are increasingly turning to video apps, such as snapchat and TikTok, as their social platforms of choice.

Media coverage with sentiment analysis over the past three months. 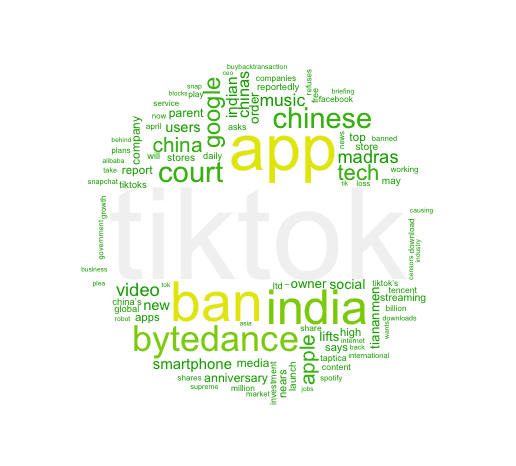 Word cloud of most mentioned words in headlines of media coverage on ByteDance over the past three months.

But TikTok’s rise has come with controversy. In February this year, ByteDance was fined by US Federal Trade Commission $5.7 million USD after being accused of illegally collecting personal information from children under 13.

In April, it was ordered to be taken off shelves of Google and Apple stores in India to comply with a court order due to “inappropriate” content. And it has been reported this month, that TikTok is under investigation in the UK over concerns on how it handles children’s data and safety.

International media coverage about ByteDance is primarily surrounding its most popular global app, TikTok. However, a deeper examination shows that the uptick in the number of articles has also included the increasing number of reports on ByteDance exploring music streaming services and possibly looking to launch its own smartphone. As well as being dragged into the conversation around the ‘996’ working day culture that’s causing widespread burnout in China’s tech world.

India’s special interest in ByteDance can be explained by the court order and ban lift on TikTok but also concerns over the nation’s biggest news aggregator Dailyhunt. In the midst of India’s national election, ByteDance’s investment in Dailyhunt and its potential influence has raised some eyebrows. Additionally, ByteDance revealed its plan to invest $1 billion USD in India over the next three years.

While the data shows that global sentiment towards ByteDance seems to be much less positive than Facebook, it’s hard to draw a conclusion whether there is media bias between Chinese and American tech unicorns. Alternatively, is Facebook’s PR team simply doing a better job?

In an interesting twist, ByteDance hired former Facebook senior executive Blake Chandlee in June 2019 to be its head of strategic partnerships for TikTok. Chandless used to be vice president of global partnerships at Facebook. Prior to joining Facebook, he was the commercial director at Yahoo UK.

So who knows what ByteDance will pull out of the bag next, and keep your eyes peeled for this tech unicorns’ next showstopper of an acquisition.