Which organizations are most active on LGBTQ+ issues?
The Signal AI Blog > Did the FIFA World Cup sponsors reap an earned media reward? 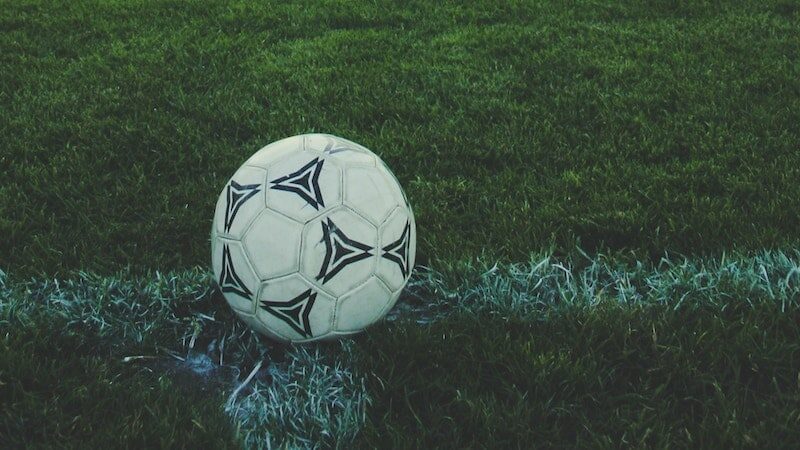 France lifted the trophy, England came to terms with the fact that football was not coming home, Russia turned out to be great hosts and we said goodbye to the FIFA World Cup for another four years.

Whether you’re a fan or not, football (or soccer if you’re reading this across the pond) draws huge global audiences and never more so than during the quadrennial World Cup. It’s estimated that over 3.4 billion people tuned in to watch the 2018 World Cup – close to 50% of everyone alive! If you’re a consumer brand with a colossal advertising budget and a desire to grow your global following, then there’s probably no better marketing platform than the World Cup.

However brand-building being a World Cup sponsor may be, FIFA was slow to attract sponsors, having to rebuild a reputation in tatters in the wake of a high-profile corruption case in 2015. Russia was also a controversial choice of host and there was speculation and concern right up until the tournament kicked off that there would be boycotts, political backlash and battles with travelling supporters.

There were opportunities for 20 brands, but FIFA secured only 16 sponsors. And they weren’t just the usual global mega-brand suspects. Alongside the household names such as Adidas, Coca-Cola and McDonald’s, there were five Russian organisations, four Chinese companies and even a Mongolian ice-cream company prepared to spend big to establish a brand presence on a global stage.

So for the plucky 16, was it worth it? Did the massive expense (up to $80m a year) of sponsorship reap them rewards in the media? Were those shelling out for long-term sponsorship doing better than those who just signed up for Russia 2018 alone? And who did best? Using Signal AI, we can begin to answer these questions.

We were able to track the earned media coverage in print and online news sources of all 16 sponsors in the immediate run-up to and during the World Cup and compare it to the same six-week period last year. We were also able to identify how many articles mentioned the company’s association with FIFA and the 2018 World Cup. 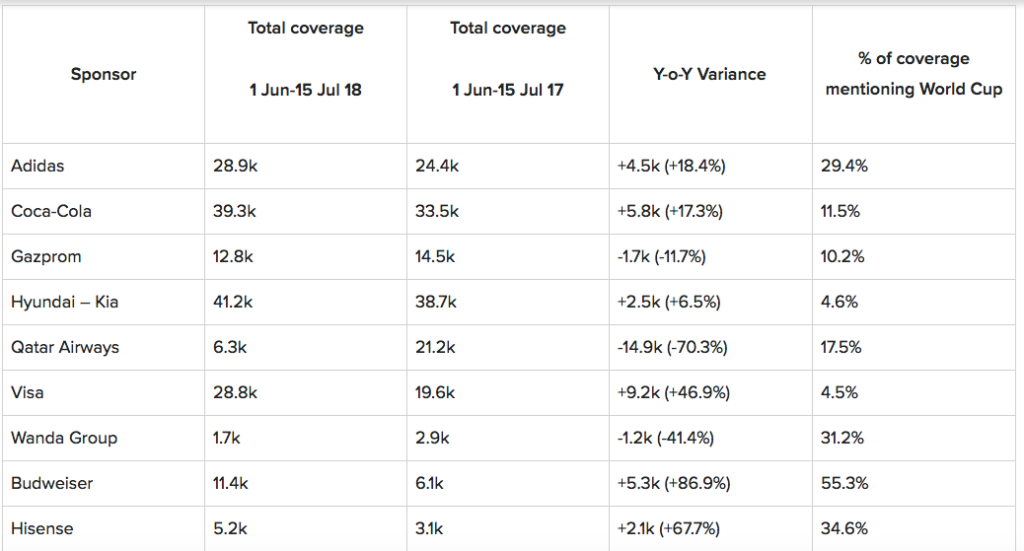 It’s clear – sponsorship may cost a lot – but it certainly pays out, too

The majority of sponsors (75%) capitalised on their association with the World Cup and experienced an uplift in media coverage immediately before and during the event that ranged from 9% to 159% when compared to the same period the previous year. In total, these 16 brands were cited 35.9k times alongside a mention of the World Cup which represented 94% of their combined overall mentions for the period.

You get what you pay for, but know your markets

The graphs below provide a comparison of the media coverage for the 16 organisations within the three tiers of sponsorship.  What’s clear is that while the top tier of sponsors (FIFA Partners) mostly did well, three saw no increase in coverage volume at all – they didn’t capitalise on the opportunity in the way others did.

Regional partners – the lowest tier – perhaps did the best as a group. All except RZD saw increased coverage, probably because they understood their domestic markets and could build effective, targeted PR rather than shooting for the world stage. Some tier two sponsors, conversely, struggled (except McDonald’s), perhaps because they hadn’t adequately prepared for such global demands and attention.

Who won the competition? Ice cream and beer

It was Mengniu, a dairy and ice cream producer based in Inner Mongolia who had the biggest increase in coverage. 65% of their coverage during the tournament was international which was consistent with the previous year.

However, unlike the prior year, the Mengniu name was appearing in a broad range of publications, not just those industry-specific titles or financial news sources including eight mentions in the Daily Mail. It’s hard to imagine how a Mongolian ice cream maker could have elevated their brand globally to this extent without the World Cup association.

While already a household name, Budweiser was able to significantly extend their reach due in part to their sponsorship of the Man of the Match trophy that was awarded after each game of the tournament.

Russia based diamond mining company, Alrosa maximised their Regional Partner status with FIFA when they, apparently by coincidence, unearthed a sizeable football-shaped diamond during the tournament that garnered them media attention.

Who lost on penalties?

Gazprom, Qatar Airways, RZD and Wanda Group each received less media coverage during the World Cup than they had the previous year. While they got mentioned in the media for their sponsorship with FIFA, other news and events related to these organisations didn’t get picked up.

All four companies had an exceptional amount of coverage in Jun-Jul 2017 with new developments, plans, acquisitions and partnerships plus legal reforms yielding them great coverage. Nevertheless, the question remains, did they fail to hit the back of the net when it came to leveraging their World Cup sponsorship within their external communications plans?

Want to get media insights on your brand and competitors?

Our AI-powered media monitoring, reputation management and market intelligence platform enables you to understand and visualise the media landscape as it relates to your brands. Request a personalised demo.

Be the first to read our new content by following us on LinkedIn.