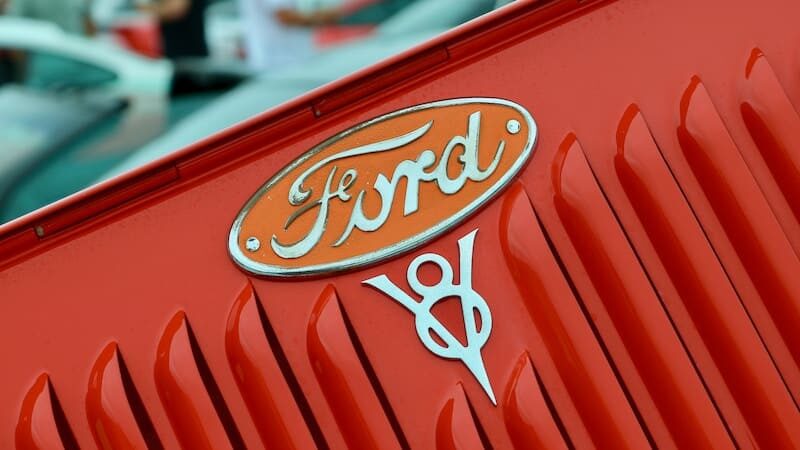 Why it pays to look good

In 2019, for a corporation to truly be considered successful, it must adhere to ethical practices.  If not, the media will rip it to shreds.  And only the corporate-gods know what reputational damage might do to a company’s profits, especially if they’re publicly traded.  This is particularly relevant to the automotive industry.

Perception is nine-tenths of reality. So if an automotive company wants to get credit for being corporately responsible, they need to get as much press for it as they possibly can. It’ll even help the bottom line.

Corporate social responsibility (CSR) is a clear messaging priority for the automotive industry. The Reputation Institute recently released a ranking of the most reputable companies for CSR. We extracted the automotive firms from the list to see whether they’re getting the credit they deserve for doing good.

Using Signal AI, our AI-powered media monitoring platform, I explored how much media coverage the top five automotive companies received for the topic of CSR in 2018.  The Signal platform uses AI to construct extremely accurate ‘topics’. These topics can then be monitored real-time across print, online and broadcast media.  Give it a try here.

Are these automotive companies successfully putting their message across, or are they not quite getting the attention they deserve? 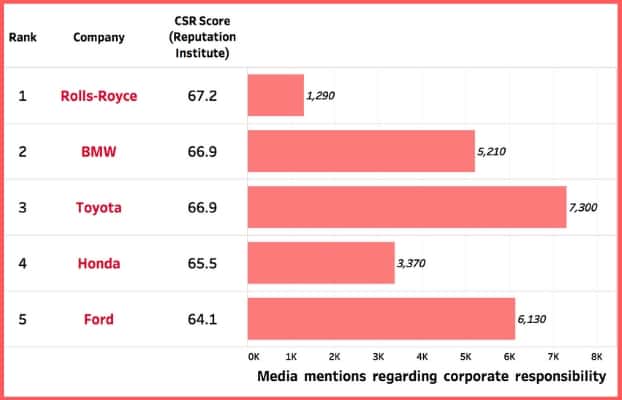 Surprisingly, there’s no correlation between CSR score and how much media coverage companies receive for all their ethical efforts.  Despite being the most reputable automotive company in terms of CSR, Rolls-Royce’s share of voice in this area is the smallest.  On the other hand, Ford has the lowest CSR score out of the five, yet it has the second-largest share of voice for CSR stories.

Rolls-Royce and Ford are both being mindful of how they’re affecting the environment and society at large.  But there’s a reason Ford is receiving almost 5x as much media coverage.  What CSR themes are they being mentioned in the news for?

Ford stole the show in June last year after hitting its carbon reduction target eight years early.  The hype rolled over to July, when news outlets focused on how Ford was investing in electric cars and campaigning for cleaner energy.  On the whole, it seems that Ford’s popularity with media outlets is due its involvement in cutting down on emissions.

Similarly, Toyota pushes the the whole ‘green narrative’, being mentioned in the news for investing in hydrogen fuel cells and electric cars.  This earned them the greatest share of media coverage for CSR. It shows that if you do good (they were 3rd place in the CSR ranking), and focus your message, you can win the PR race, hands down.

Rolls-Royce are unfocused, losing the race

Rolls-Royce on the other hand is an all-rounder, focusing on an array of different CSR targets.  This explains their really high CSR score. Unfortunately, their low media coverage is due to the way they package their endeavours.  Whilst their competitors frequently use buzzwords such as “green energy” and “low emissions”, Rolls-Royce primarily focuses on the innovative tech that precedes sustainable practices.  Unfortunately, general innovation in tech isn’t exactly a punchy topic, explaining why Rolls-Royce don’t garner traction in the media for CSR.

Media coverage: A focused message is an effective message

The data is clear. If you want to attract significant media attention for CSR, you have to streamline your PR strategy.  Give it a lot of the same, over a consistent period of time.  What are one or two things your company is most proud of?  Take those themes and use them to spearhead your PR narrative. (And make sure you’re doing good, too).

Want to see how you compare against your competitors?  Request your free bespoke competitor analysis report here: