Exec Connect Live video highlights: Data for progress, Comms driving ESG, and a new Reputation Ranking
The Signal AI Blog > How to use newsjacking in your PR strategy

How to use newsjacking in your PR strategy 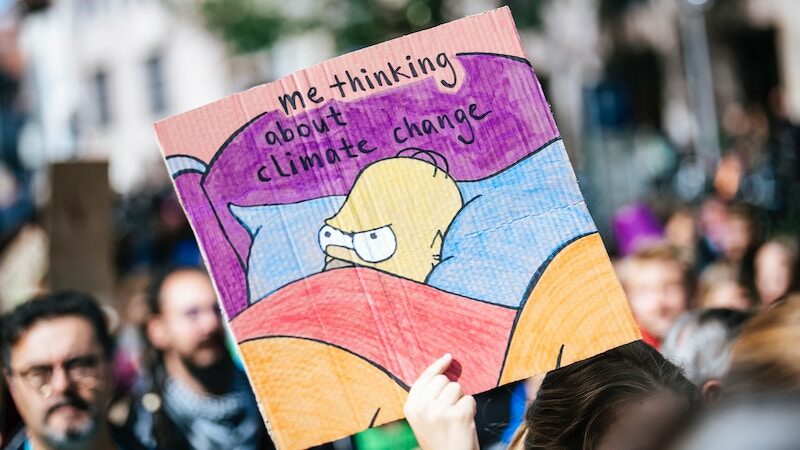 Newsjacking is another one of those PR buzzwords that is hard to define and even harder to implement.

Here we will illuminate the murky waters of newsjacking and reveal the dos and don’ts of this controversial tactic. Get ready to find out the best ways to implement newsjacking into your PR strategy.

Ah, the subtle (or not so subtle) art of newsjacking. The similarity to the word ‘hijack’ might have negative connotations, but this tactic can really be a PR team’s fast track to success.

Newsjacking is the practice of leveraging news coverage for your own goals.

By monitoring media in real-time and finding a trending topic, you can look for a way to ‘hijack’ your way into the conversation by working out a relevant angle.

Piggybacking off what’s happening in the news by disseminating your messages, angle and ideas into the conversation is a sure-fire way to have what you’re saying read by more people. Capitalising upon those strategic PR opportunities. But you’ve no doubt read about brands who have made grave, grave errors, only to be vilified in the media as a result.

You need to have a keen eye on what’s trending, an acute awareness of pop culture, and be able to make quick-fire decisions. You need one eye on the news, and one eye on your social feed. Maybe even eight eyes, because two definitely isn’t enough when it comes to newsjacking.

Newsjacking: Headlines for the right reasons

Perhaps the most lauded social newsjacking is the famous Oreo ‘You Can Still Dunk in the Dark’ Superbowl social post of 2013.

When the power went out Mercedes-Benz Superdome, the team at Kraft were situated in a ‘war room’ with a creative agency, working on their pre-defined social strategy.

The nitty gritty of the blackout

In an interview with Digiday, the team told how they jumped on the moment and created the post.

“All of us who were covering the game in real time (I was live tweeting for Adweek) were thrown for a loop with the blackout. It wasn’t even clear what was happening or how serious it was.

The audio cut out and the stadium grew dim—though not “dark”—so it was hard to tell if it was a technical problem or something more serious. It’s very hard to be creative and funny in a chaotic moment like that” said David Griner, digital managing editor, Adweek.

“The blackout happened not long after halftime,” continued Michael Nuzzo, creative director, 360i. “There were 10 of us in the room. I was sitting in a swivel chair, holding a pulled pork slider. And it was, boom. I spun around and looked at the guys and said, “We should probably do something.””

They made headlines around the world. 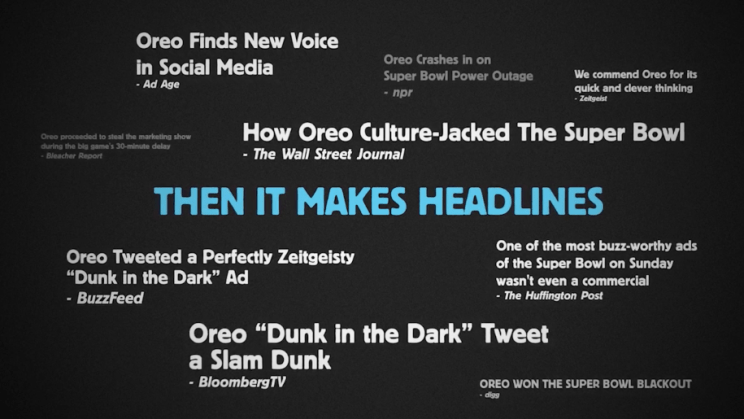 “As a creative, you wonder what the thing is that’s gonna be the moment you’re proud of. For weeks and months after this happened, and then getting a Pencil for it a year later, the response from it from across the world, it was humbling and exciting for myself and for the team and the brand.” Michael Nuzzo, creative director, 360i.

By being reactive and agile in your PR strategy, you’re much more likely to be able to incorporate this tactic. With the hope of being as successful as Oreo (you can dream!).

But before you do – let’s discuss the bad and the ugly of newsjacking, and what we can learn from other brands who have famously done pressed publish, only to regret it.

Sensitivity is a must with newsjacking

You can ‘newsjack’ with events you know are coming up, or are annual. it’s certainly simpler than reacting in real time. But choosing the right kind of event to insert yourself into can be tricky – and a lot of brands have learnt that the hard way.

Okay. So one news event that’s better left alone – if you’re to learn from the past mistakes of others – is 9/11. You’d think that an event that saw the deaths of 3,000 people would be off limits. Sadly not.

Lest we forget the Marriott Hotel offering complimentary mini muffins and coffee for the duration of the time that it took for the two towers to fall.

A poster was left beside a basket of muffins which read: ‘In remembrance of those we lost on 9/11 the hotel will provide complimentary coffee and mini muffins from 8.45 – 9.15am.’

The stunt of course went viral. Insensitivity is a sure-fire way of seeing your newsjacking efforts make headlines for the wrong reasons.

Another brand that fell foul of newsjacking is AT&T, with this ill-judged tweet. 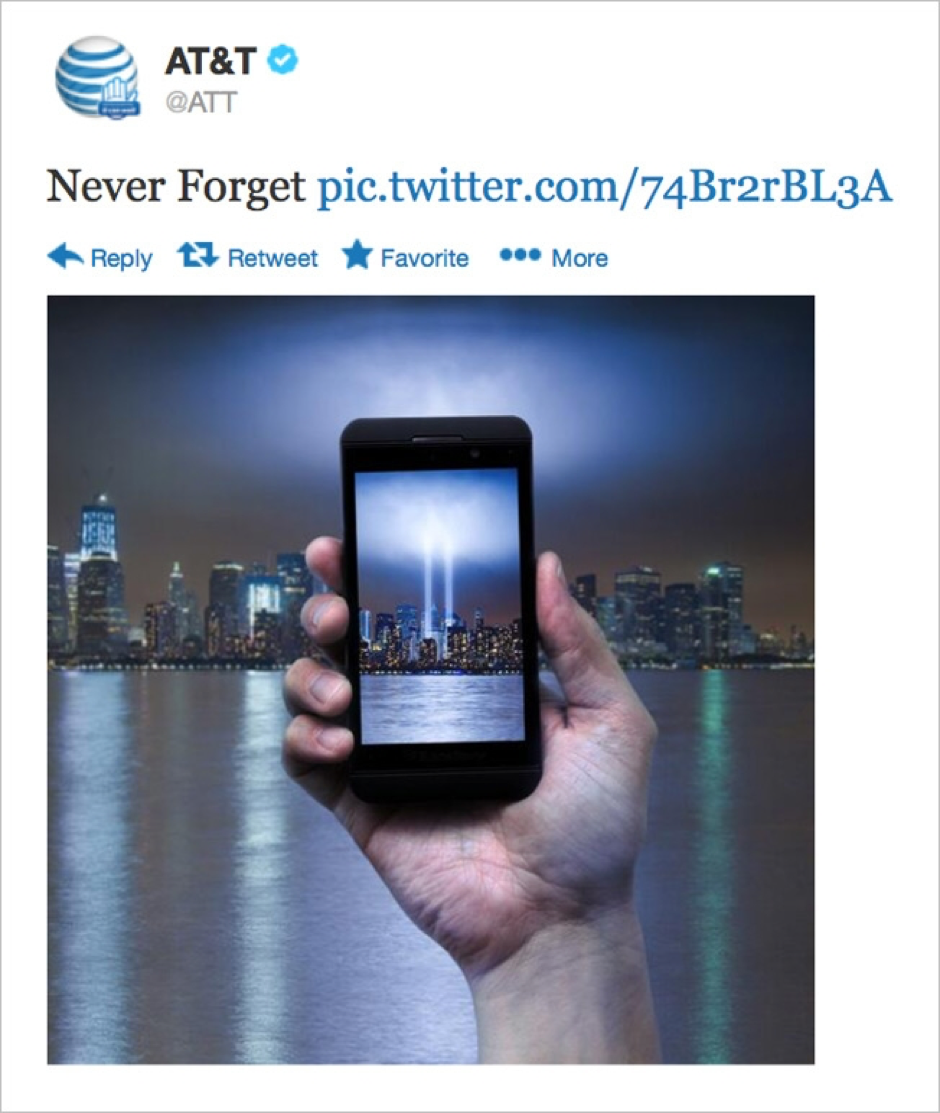 The key learning here is you absolutely must ‘read the room’ before pressing send. Unsure? Don’t do it. Wait until you’re sure.

Let’s say you’ve found an angle, and you’ve crafted the killer one-liner that’s going to give you your Oreo Moment. You’re poised and ready to press ‘tweet’. The air is electric. Do you know why you’re actually doing it, though?

It’s important to remember what benefits newsjacking can actually bring to your business: 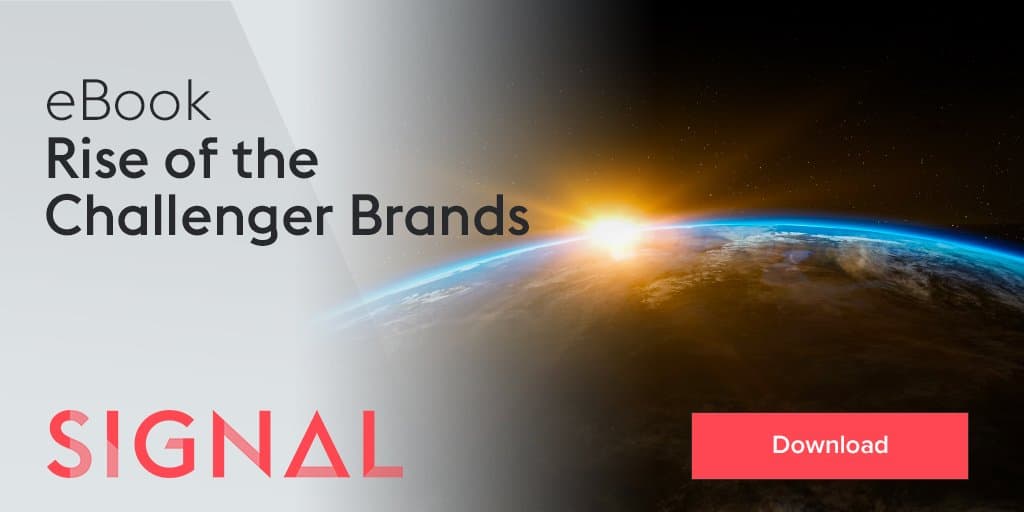 How to find the right news

Being able to find the right news is a real-time, real-hard job.

Sure, there are the culturally significant events that you’ll know are coming up, so you can plan for them (ie; 9/11. But don’t use that one), but the real newsjack winners are the brands that hop on something unexpected (like Oreo and the blackout).

You need to be able to scan what’s trending and driving conversation, so a media monitoring tool that alerts you in real-time is an absolute must.

Remember – newsjacking does have a very short shelf life. So catching a breaking story on a media monitoring tool and jumping on it in real-time gives you a greater chance of success, before it becomes tomorrow’s fish and chip paper.