Lessons from Christchurch: How the media finally acknowledged far-right terrorism 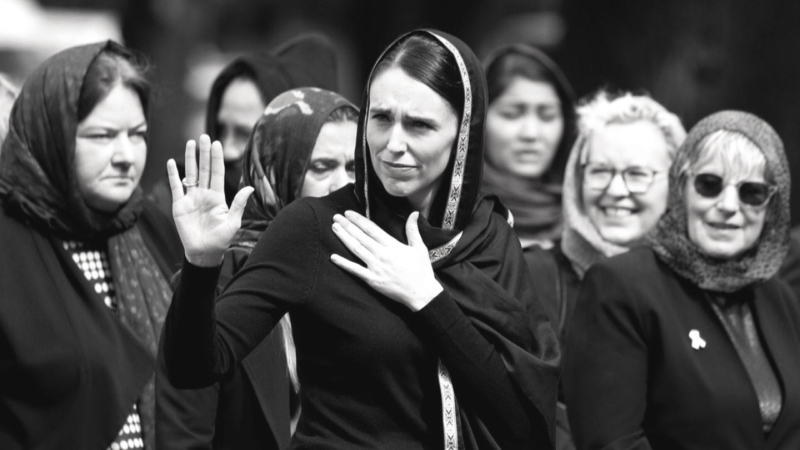 Why does the media refuse to call white murderers terrorists? Why, instead, are these killers humanised and we, the reader, encouraged to feel for or relate to them? These questions have surfaced time and time again during the increasingly prevalent white-supremacist and far-right attacks of recent years. Both in terms of the language used, and the quantity of coverage, media treatment of differing forms of extremism is skewed. A Muslim can be expected to be immediately labelled a terrorist, whilst the media is hesitant to apply this term to white people. Research by the University of Alabama has shown that, between 2006 and 2015, terror attacks committed by Muslim extremists received 357% more US press coverage than those committed by non-Muslims, despite the fact that majority of domestic extremist killings in this period were linked to right-wing radicalism.

On March 15, a white supremacist committed the deadliest act of terrorism in New Zealand’s modern history. A shooter began attacking the Al Noor Mosque before continuing on to the Linwood Islamic Centre. 50 people were killed, and 50 others injured. The first of these attacks was streamed live on Facebook.

The media fallout and coverage of this event has been intense. In the two weeks after the attack there were over 200,000 pieces covering the shooting and its aftermath.

The Daily Mail and the Mirror described the shooter as “angelic” and a “little blond boy” respectively. Both have been criticised for doing so, but how pervasive is this type of language in the media?

Below is a statistical analysis of over 200,000 news items published in the two weeks following the Christchurch attack. These articles come from around 80 different languages. It compares these pieces to ones on recent Islamist extremist attacks and other recent far-right attacks. In particular, there is a focus as to what extent these attacks are linked to terrorism with the language used in them.

Over 40% of global coverage has not labelled this attack as an act of terror.

This disparity varies across different forms of media. Broadcast media (TV, radio etc.) failed to relate the attack to terrorism far more frequently (51.7%) than any other. One possible explanation for this is broadcast pieces tend to be the shortest (by word count) of all; they cut down stories to a minimum level of information.

Given this data is pulled from a set of 3,000,000 sources one might ask whether this disparity is present in what might be called “top-tier” news outlets. These outlets, with larger audiences and more authoritative reputations, are more influential.

Filtering down to a select list of 50 top-tier outlets (see below, Appendix 2), this gap is actually amplified: 52.3% of pieces fail to mention terrorism. Between these 50 publications, the attack was mentioned over 4,500 times. Many of these articles were not dedicated to this event and only made passing references to it. As with the brevity of broadcast media, this might be a reason for failure to connect the attack to terrorism.

To account for this, we can look at articles that specifically mention the Christchurch attack in their headline: it seems reasonable assume that these articles were directly on the attack.

Whilst the gap narrows, it is still very much there.

In pieces that mention the attack in their headline, from all sources, almost two fifths (39.8%) did not mention terrorism.

From our top-50 source set, pieces mentioning the attack in their headline did not mention terrorism over a third (36.0%) of the time.

Other acts of extremism

Obviously, the above means very little if we do not compare it to other acts of extremism.

We compared coverage of the Christchurch attack to that of six Islamist extremist attacks in the last 15 months of news. The following attacks were chosen:

Likewise, we compared the Christchurch attack to five other far-right/white nationalist attacks:

To ensure as fair a comparison as possible, the exact same thing was looked at in each case, namely: the number of articles mentioning the attacker (by name) was compared with those that mentioned the attacker but did not mention terrorism.

The results were striking, if uncomfortably unsurprising:

The first thing that is evident is that reporting on Islamist extremist attacks is quantifiably different to reporting on far-right attacks. The media is, as expected, far more likely to relate these attacks to terrorism.

The gap is vast.

The second thing to notice is that the Christchurch attack is anomalous in how ready the media has been ready to label it terrorism. This is particular notable when we compare it to last year’s shooting in synagogue in Pittsburgh. Evidently there was something different about the reaction to the Christchurch attack than other far-right extremist attacks.

However, despite the similarities there is evidently an incredible difference in the way in which these two events were reported.

Why attacks by far right supremacists are not considered terrorism?

President Donald Trump condemned the Pittsburgh attack as a “wicked act of mass murder”. He did not, however, call it terrorism.

Prime Minister Jacinda Ardern, on the other hand, called the Christchurch attack an act of terror within six hours of it starting. It seems that Arden’s willingness to label the Christchurch shooting as terrorist has led the media’s narrative.

We can see the impact Ardern’s comments in real-time coverage of the shooting. Below UK coverage of the attack is shown. Limiting the coverage to one time zone allows us to map how coverage changed on this day (articles appear on the graph in real time at the local time of publishing.) Ardern made her comments at 7.30 PM in New Zealand, which was 6.30 AM UK time. Note the uptake in pieces that describe this attack as a terrorist attack (the pink line) and the decline in coverage that does not describe it as such (the red line) 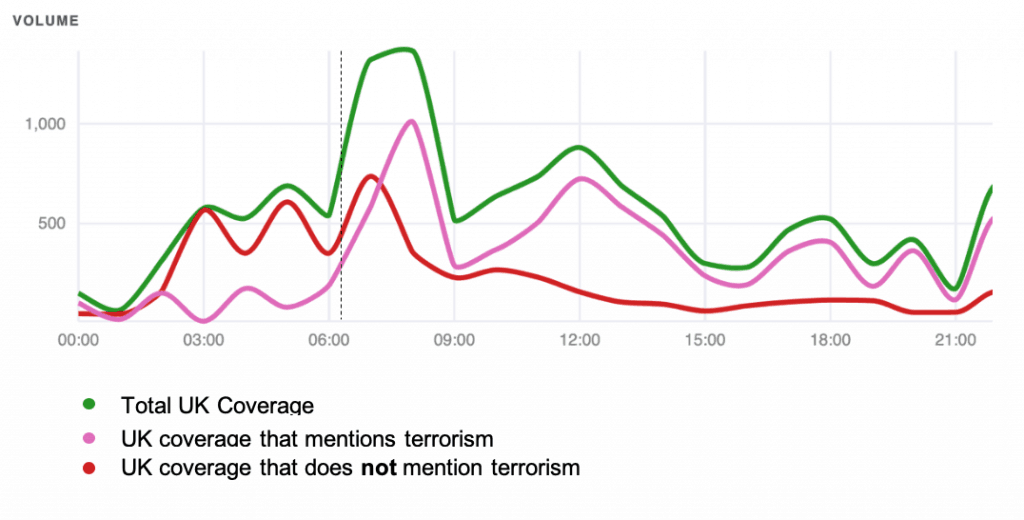 The example set by Ardern immediately filtered into the media. Before her comments few publications labelled the attack terrorism; after them, few did not. Ardern’s voice was powerful in setting the tone for the response to the attack.

The graph below shows coverage of the Pittsburgh shooting the week it happened as a whole (the blue line), compared to coverage which made no relation between it and terrorism (the orange line).

Compare this to recent coverage. Below is a graph of coverage of the Pittsburgh shooting from the week of the Christchurch shooting. Notice the huge reduction in coverage that makes no mention of terrorism.

Therefore, the impact of Ardern’s words have gone further than just influencing how the Christchurch shooting is spoken about. They may have been a step, even if only a small one, in altering the media’s representation of terrorism as a whole.

The belief that the media treats terrorism unequally depending on the background of the attacker is grounded in the numbers. In the attacks studied, articles on Islamist extremism did not mention terrorism one quarter of the time. Articles on far-right attackers did not mention terrorism three quarters of the time. This is an issue that will apply to media in all topics, not simply terrorism. No media outlet can be taken as an impartial source, each weave their own preconceptions and biases into narratives regardless of the topic.

The Christchurch shooting is actually exceptional in how willing the media were to label the shooter a terrorist. The reasons for this are not entirely clear but seems to have been added to by Ardern’s bold and immediate stance on the attack. If this is the case, it shows that influential figures may have the ability to shift the narrative around events and topics. Spokespeople’s language filters into the media and, likely, into public dialogue.

Top 50 Global Sources (nb. This list was not specifically created for this project):

[1] At the time of writing (28.03.2019) there have been 231,289. [2] There have been 92,689 pieces which use none of the following words at any point: “Terrorism”, “Terrorist” or “Terror”.
We use cookies on our website to give you the most relevant experience by remembering your preferences and repeat visits. By clicking “Accept”, you consent to the use of ALL the cookies. However you may visit Cookie Settings to provide a controlled consent.
Customise SettingsAccept
Manage consent