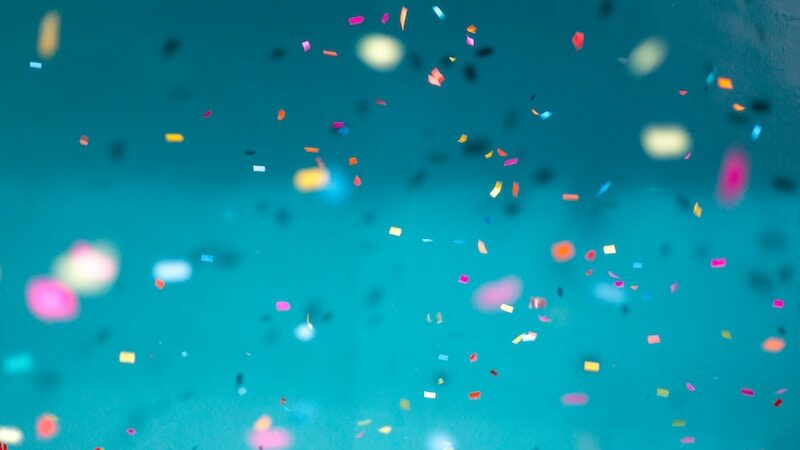 MWC have announced that 109,000 attendees visited Barcelona this week, 2,000 more than last year and a new record for the event. Foldable phones, 5G roll-outs and disgruntled Americans have dominated this years conference. Whilst most product launches occurred early in the week, many interesting stories still came out today, the final day of MWC ‘19.

Nokia announced that their Nokia 9 PureView (the one with 5 cameras that looks like Squishy from Monsters inc) will be retailing in the U.S. from March 3 at a marked down price of $599. Energiser’s new phone, Power Max P18K Pop, made by Avenir, promises a 50 day battery life from one charge. The device isn’t slim or sleek though, leading to tech fans describing it as an “absolute unit” and the “thick boi” of the mobile world.

Huawei, as always, topped the leaderboard for news coverage today, with 675 articles. As if the US weren’t tarnishing Huawei’s reputation enough already with spying allegations, many attendees were less than pleased to discover that the Mate X has a hidden fourth camera. When asked how the mobile knows which side of the phone to show the screen on, and if there is a hidden sensor, CMO Herman Zhu replied: “you are right, but we didn’t really tell people about that feature.”

In non-mobile news, Oral-B unveiled an artificial intelligence toothbrush, named Genius X, that offers personalized feedback on the areas of the mouth that require additional attention. Oculus Rift impressed with their combination of 5G and VR. Those at the conference today were able to immerse themselves in virtual reality as they became spider-man for a few minutes, casually swinging through the streets of New York.

Lexon showcased their new phone charging and cleaning device, the Oblio. Looking like a small vase, this handy piece of tech wirelessly charges your mobile whilst sanitizing the display with purple UV light. Neat.

As the emotional rollercoaster of MWC ‘19 comes to a halt, I look back on the past 4 days with pride for how much the tech sector has achieved over the last 12 months, and optimism for the future of the telecoms sector. The exciting ideas of last year’s event – such as foldable phones and 5G – have become a reality, and I am interested in seeing how these hot topics play out in the upcoming months. Thank you for checking in with my daily round-ups, I’ll see you all next year.

On the penultimate day of Mobile World Congress last year, Huawei showed off a drone taxi. On the same day, Vodafone and Nokia announced they would be enabling 4G on the moon (even though half of Britons have problems with their broadband here on Earth.) Days 1 and 2 of the MWC may have seemed tame in terms of such futuristic tech compared to 2018, but what they have lacked in sci-fi they have more than made up for in political tension. Speaking of which, Here’s your daily round-up of MWC: 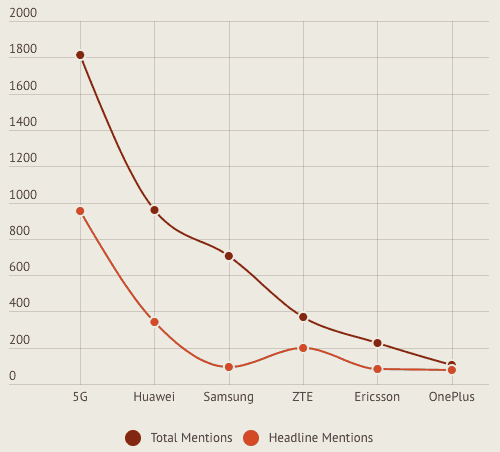 ZTE for the WIN

The ever-present trifecta of 5G, Huawei and Samsung is getting a little repetitive now. But they just won’t quit. For the third day in a row the hot topic and Asian giants have topped the media mentions leaderboard, with 1,811, 956 and 705 mentions respectively.

However, if we look deeper into today’s headlines surrounding MWC we find a few bright sparks who, although not being mentioned as much, are gaining more of their mentions through headlines. ZTE received over 200 headlines mentions today, making up 55% of their total coverage. In the last 12 hours the Chinese Multinational unveiled the industry’s first commercial-ready A.I.-based slice operation system; won the ‘2018 Global 5G Technology Leadership Award’ and released their Blade V10 smartphone. Talk about busy day at the office.

Ericsson signed a 5G roadmap agreement with Russia’s leading telecommunications operator, MTS. The two companies agreed to cooperate back in 2015, and MTS’s president and CEO, Alexey Kornya, was glad to announce they “hit all the targets envisaged under that agreement” and looked forward to “further innovation.”

Almost all of OnePlus’s coverage today came in the form of headlines, but not all for positive reasons. Journalists and bloggers were disgruntled to find out the upcoming OnePlus 7 will not have wireless charging, something that has been hyped up since Apple introduced it for Iphone X.

Today’s news perfectly demonstrates the importance of that age-old saying, “quality over quantity”. ZTE is the winner of the day, literally in terms of awards, but also in terms of powerful media coverage. Once again Huawei was the most mentioned organisation, racking up yet more 5G deals despite ongoing pressure from US officials. Something that has become a staple topic of these daily round-ups. As the conference draws to a close, companies are running out of time to make their mark on MWC 19. Check in tomorrow to see how it all plays out.

Toy Story, The Godfather and our daily MWC coverage round-ups – three prime examples of how sequels can, unbelievably, be better than the original. Yes, its Day 2 of Mobile World Congress in sunny Barcelona and the news just keeps coming. But who’s making noise today? 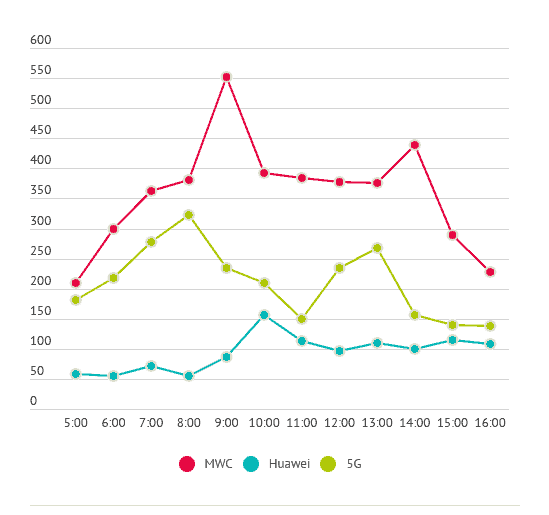 2nd lap of the two-horse race

As it turns out, the same people as yesterday. Huawei and their 5G capabilities has remained the most covered topic of MWC throughout day 2, despite the efforts of US officials to ban the Chinese firm’s technology. On Monday evening the UAE agreed a strategic partnership to deploy an end-to-end 5G network in 2019. Coverage peaked for 5G this morning for a mixture of announcements, including Barcelona’s new 5G ambulances.  For Huawei, various publications quoted Chairman Guo Ping responding to US national security threat claims. He stated: “what we promise is we don’t do anything bad — we don’t do bad things.”

Qualcomm hosted over 30 industry leaders at 11am to celebrate their launch of 5G, which was picked up by 50 publications. Sony teased their Xperia 5G; Xiaomi presented a new connected light bulb that lets users control light colour and brightness via an app and Microsoft rolled out its HoloLens 2 mixed-reality headsets.

Away from the headlines of foldable phones and 5G, Orange and SEAT both gained coverage for their far less glitzy product launches. Orange’s $20 Sanza phone – a middle ground between a feature phone and a smartphone – was called the ‘unlikeliest hero’ of MWC. The French company plan to promote ICT in the African and Middle-Eastern countries it operates with this cheap, yet intelligent, device. SEAT managed 100 mentions for their new all-electric quadricycle, the Minimó, which incorporates both the smaller dimensions of a motorcycle and the safety standards of a normal car.

We are halfway through MWC 19 and one thing is very clear: Huawei have, for better or worse, dominated the headlines this year. US officials claim leaders have been listening closely to their concerns, but deals signed today and last night between Huawei and various organisations suggest otherwise. Tensions between the US and China have spilled into this event, and overshadowed all other proceedings so far. Bring on day 3.

It’s like Christmas, Easter and New Year’s Day all rolled into one for Technology & Telco professionals, just slightly more important. 100,000 attendees from over 200 countries make the Mobile World Congress one of the most significant and talked-about events of the year for tech. Only open since 9am this morning, MWC 2019, based in Barcelona, has already managed to make serious headlines.

Dubbed ‘The Battle of Barcelona’, tensions between Huawei and the US have stolen the show so far at MWC. The Chinese giant has booked out a huge stand at the show, where earlier today they unveiled their foldable Mate X phone. Some of those not celebrating Huawei’s efforts are the US officials lobbying for European leaders to ban Huawei’s internet infrastructure, due to claims of espionage for the Chinese government. Huawei has won the PR battle today, being mentioned in ⅓ of the 7,000 articles covering the event so far.

Further helping Huawei’s coverage is the ever-present topic of 5G. Vodafone’s CEO claimed that banning the company’s technology would be “hugely disruptive” and set Europe back 2 years in rolling-out 5G. 5G was mentioned in over half of all MWC coverage, with a whopping 3,837 articles.

Samsung’s tactical decision to unveil their Galaxy Fold last week gained them coverage as the ‘first provider’ of this new technology. They were mentioned 1,300 times today, overshadowing LG, who followed with their foldable V50, which gathered only 688 mentions. Perhaps the most disappointing announcement was the Nokia 9 and its 5 cameras. Its mere 211 mentions included complaints from users with trypophobia (fear of holes) and yawns from tech bloggers expecting something more.

5G, the $2,600 foldable Mate X and Huawei’s tensions with the US have dominated the news for the first day of MWC. I expect all three to make similar waves in tomorrow’s news, but look forward to new contenders in the battle for coverage throughout this event.