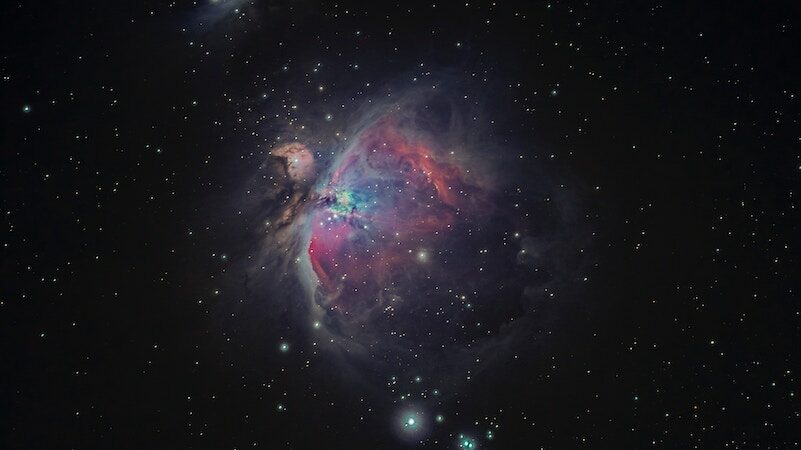 Samsung shooting for the stars in #SpaceSelfie campaign

Samsung has launched a new campaign creating selfies that are out of this world! The campaign named ‘SpaceSelfie’, is the brainchild of agency Bartle Bogle Hegarty (BHH) for Samsung’s new CMO, Benjamin Braun. With the intergalactic campaign launched to coincide with Samsung’s 50th anniversary.

The idea being the campaign “entailed lifting a Galaxy S10 5G into the upper atmosphere onboard a super-pressure, high-altitude balloon.” The phone will remain in space for a limited time, allowing people from earth to transmit through their images. These will then be superimposed onto images of space taken by the galaxy exploring phone. Transporting consumers to new heights and “a journey beyond the norm.”

The “SpaceSelfie” effort is being driven by influencers, including model and actress Cara Delevingne, who will be promoting them on their social feeds. Truly a marketing and PR campaign that is out of this world.

July 2019 was the hottest month on record worldwide. Scientists estimate that species of animals are going extinct up to 1,000 times the background rate; with dozens of species being lost everyday. And teenage activist, Greta Thunberg, and her fellow pupil climate strikers are receiving an increasing amount of vitriol, hate, and event death threats from adult climate deniers.

It’s evident that we’re experiencing a climate crisis, with climate deniers going through a personal crisis of their own.

But what has this got to do with PR and Comms? Sue Garrard – the corporate responsibility and sustainability expert – thinks it has a lot to do with the industry. And with her experience, she has a bone to pick with climate deniers and the industry that simply stands-by.

As a recent addition to PRWeek’s Hall of Fame and experience leading Unilever’s sustainability and comms, Garrard warns against working with climate deniers. She has called on the industry to not “talk our way out of something we have collectively behaved our way into.” Garrard wants us to talk and act; or more to the oint, put our month where our mouth is.

Alan Jope, global CEO of Unilever has publicly supported Garrard. Stating that her biggest legacy at Unilever was, “the embedding of social and environmental sustainability in every aspect of our company.”

A worthy legacy if you ask us. And hopefully, if climate deniers in the PR and Comms industry refuse to listen to Greta they might just be convinced by a Unilever-backed Garrard.

Global brand consultancy, Interbrand, has been producing the Interbrand Best Global Brands report for two decades. In those 20 years it has become an integral benchmark for the success, or failures, of the big brands at the top. With the report indicating the downfall or meteoric rise of many a conglomerate.

The 2019 version of the report was published this week, spurring the PR and Comms teams of those included into swift action or celebration. Here are the top 10 ‘Best Global Brands’ of 2019:

Notably, Facebook has fallen out of the top 10. After a couple of tricky years, marred by the Cambridge Analytica scandal and the falling interest in Facebook’s cryptocurrency Libra, the proof of their actions is in the Interbrand pudding. The social media network has dropped from 9th place to 14th, as the estimated value of its brand declines 12% to $39.9 billion.

A temporary blip in Facebook’s success? Or an indication of a permanent downward trajectory? I guess we’ll find out in next year’s Interbrand Best Global Brand report.

PR professionals in travel and tourism are on a mission to change Saudi Arabia’s controversial reputation. Especially after recent events, such as the war in Yemen and dissident Khashoggi’s murder. The initiative is part of Mohammad bin Salman’s “2030 vision.” A vision to reduce Saudi Arabia’s dependance on oil and diversify the economy by attracting 30+ millions tourists a year.

The promotional campaign, which aims to attract young travellers, relies heavily on social media influencers to modernise the country’s image. Influencers are taken on all expenses paid luxury trips to explore the unknown hotspots of Saudi Arabia. 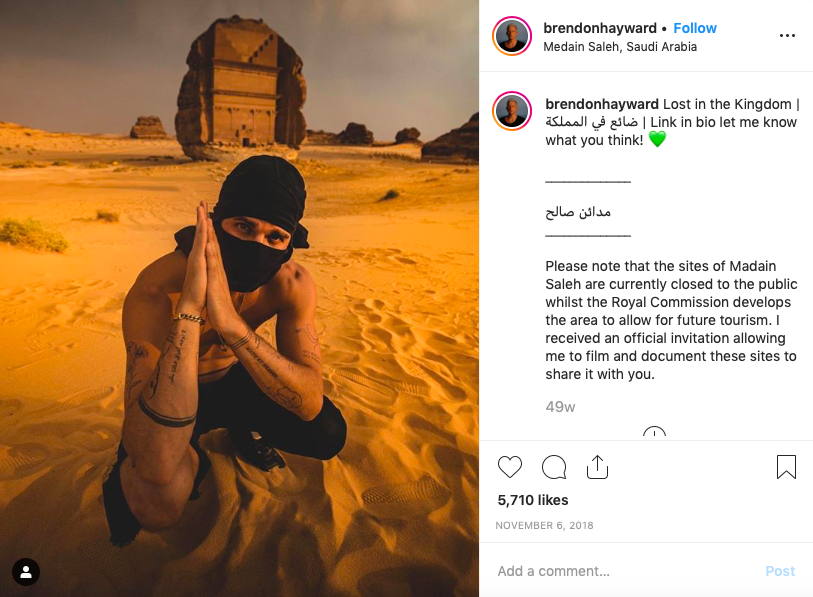 Several PR agencies are involved in the campaign to open some of the largest tourist resorts in the world. This includes a massive sustainable luxury island resort. The resort will be developed over 28,000km of land on the Red Sea, the “Riviera of the Middle East”.

The end goal? To take over the luxury island getaway crown from the Maldives.

Other marketing tactics to improve the Saudi Arabian image have also been engaged. International paid advertising campaigns are promoting tourism in key locations, such as Piccadilly Circus. The state has spent millions hosting big sporting events. And a not insignificant amount of money has been spent on lobbyists following Khashoggi’s murder.

A number of non-governmental programmes have also been put in place. Gateway KSA is an example of a programme focused on enticing graduates for educational exchange programmes. So far it has invited a few hundred students, including 19 influencers and content creators. Perceptions of 88% of the students have shifted in a positive direction and 97% believe that the country is represented inaccurately in the media.

With this in mind, maybe influencer campaigns will be enough for Saudi Arabia to change their image and attract visitors. But I think we’re about to find out… 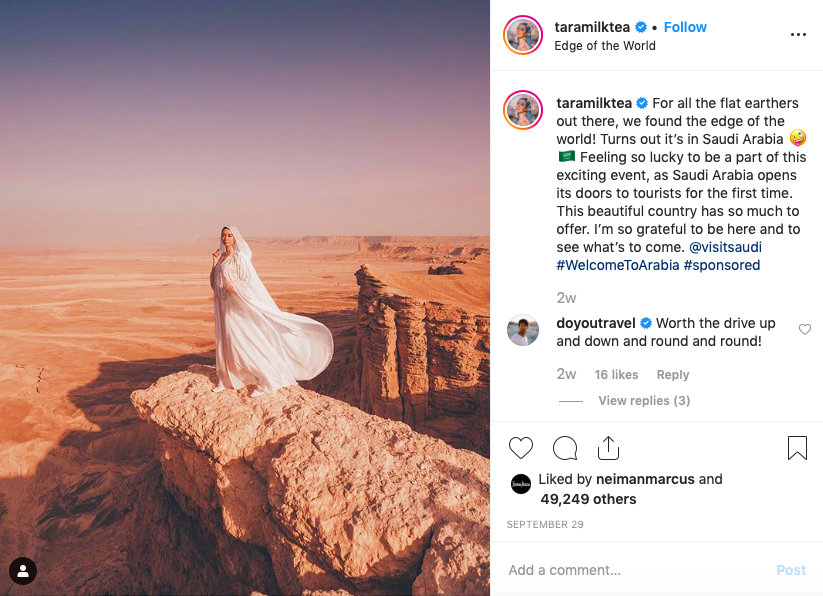 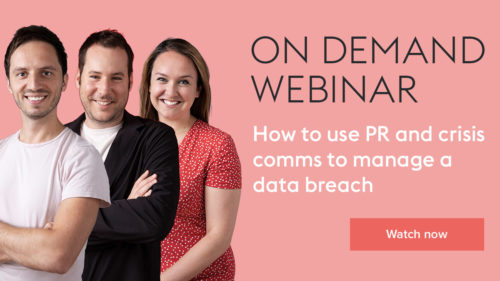 It’s never easy to be the one in charge when weathering a crisis. From data breaches and cyber attacks to misguided tweets from a member of the C-suite and a complete drop in profits, the possible crises are endless.

Which is why, when hit with a seemingly never ending run of bad new, reviews, and valuations, WeWork‘s chief communications officer resigned on Wednesday 9th October 2019. Jimmy Asci, the WeWork COO who had joined the unicorn co-working company in April, resigned amid crisis comms and reports of exploding WeWork mugs, growing losses post-IPO paperwork, and cancer-causing formaldehyde in WeWork booths.

After everything WeWork has been dealing with over the past year with crisis comms, Asci’s dramatic exit and the board ousting divisive CEO, Adam Neumann, the future of WeWork is uncertain. This may become a cautionary tale for future unicorns, to not become too big for their boots.