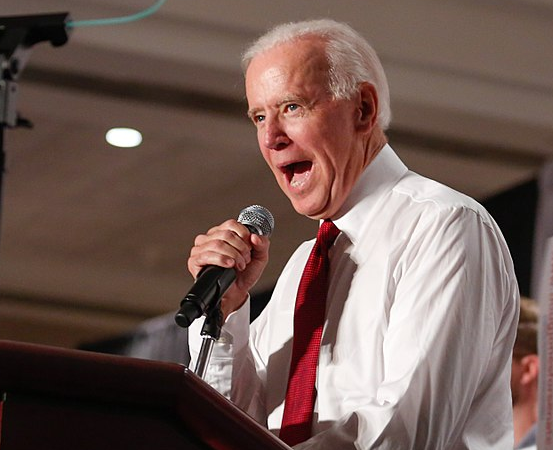 We continue our media monitoring of the US Democratic Party presidential primaries candidates in our most recent 2020 Democratic Primaries Index.  Using Artificial Intelligence, we’ve been able to track every time any candidate is referred to, even if not by name. Make sure to take a look at our previous June, July, August and September through November updates to find out what happened previously. This update will focus on December to January 15th, including the Iowa debate.

Coverage over the last four months 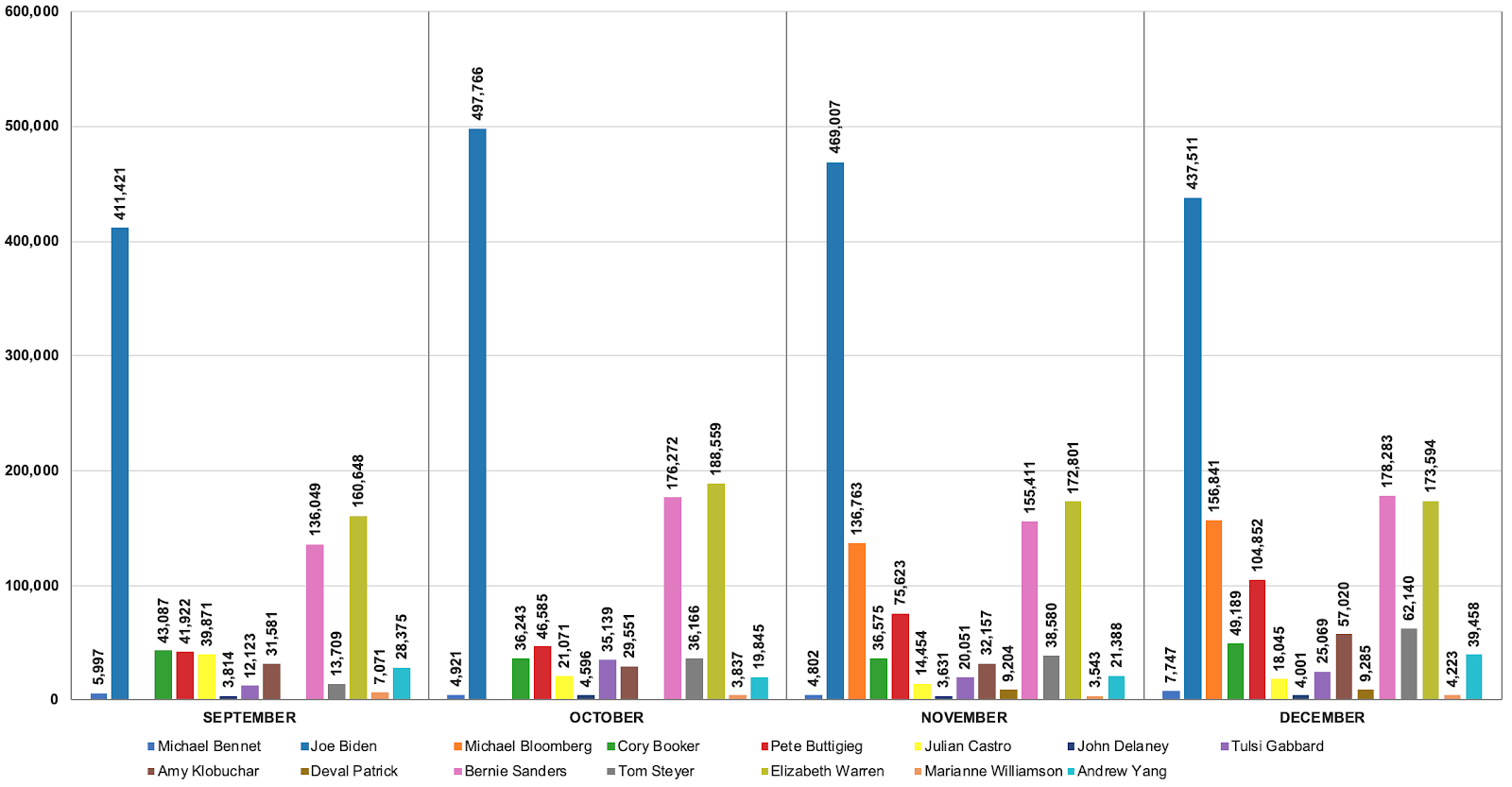 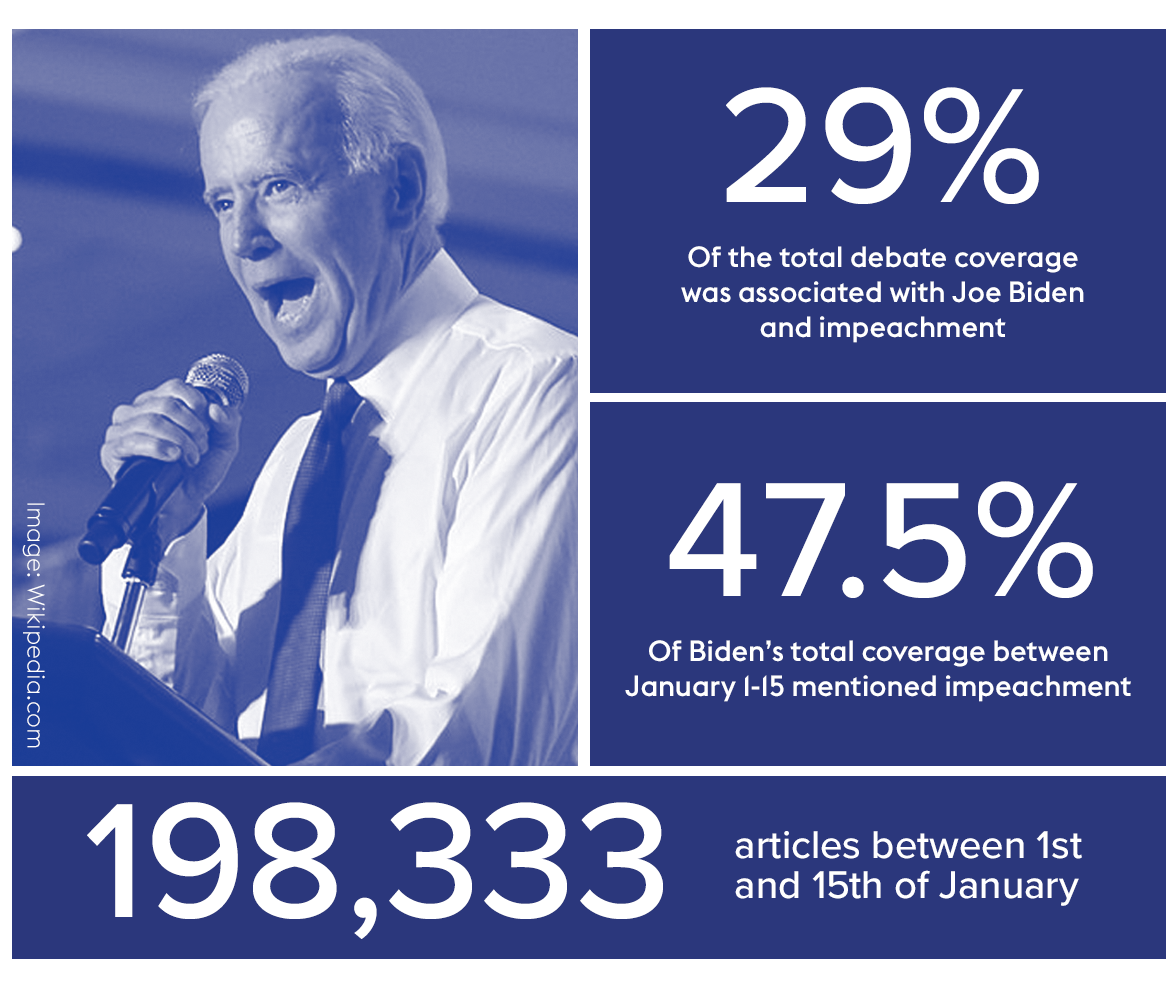 As with previous months, Joe Biden received the highest volume of media coverage in December. Coverage for Biden peaked on December 5 – this was due to Nancy Pelosi announcing intent to impeach Trump, regarding allegations he coerced Ukraine to investigate Joe Biden and his son, Hunter Biden. Biden’s dominance, in terms of coverage, highlights how the topic of impeachment continues to overshadow the primaries as a whole. When Trump’s impeachment was announced coverage of him spiked to a 12-month high.

Just seven candidates qualified for the sixth debate in Los Angeles: Klobuchar, Steyer, Yang, Sanders, Biden, Warren, and Buttigieg. During the debate, tensions between Warren and Buttigieg peaked. Warren targeted Buttigieg’s campaign fundraising tactics, whilst Buttigieg retaliated with criticism of Warren’s free public college plan.  Meanwhile, Biden seemed to slip under the radar, and spoke for four-to-five minutes less than Sanders, Buttigieg, Warren, and Klobuchar. The shift in focus from Biden to other candidates during this debate potentially contributed to the decrease in his media coverage during December.

Number of articles over time for the top 10 most covered candidates (Joe Biden included).

Number of articles over time for the top 10 most covered candidates (Joe Biden excluded).

The seventh democratic debate took place on January 14, and attracted vast media attention. Key topics discussed at the debate were healthcare, defense, and environment. However, the feud between Warren and Sanders largely overshadowed other issues in debate coverage, and the wide coverage gap that usually exists between themselves and Biden was nonexistent.

Unsurprisingly, Biden once again dominated coverage, largely due to reporting on impeachment. Of the total debate coverage, 29% was associated with Joe Biden and impeachment.  Additionally, at an individual level, 47.5% of Biden’s total coverage between January 1-15 mentioned impeachment. These figures demonstrate how entrenched the topic of impeachment has become in Biden’s media coverage.

The seventh democratic debate took place on January 14, and was the last debate before the Iowa caucus on February 3. All of the candidates emphasised the importance of beating Trump in the next presidential election, and discussed who would be the right fit to accomplish this. Warren fought her corner, outlining that “since Donald Trump was elected, women candidates have outperformed men in competitive races.

Prior to the debate, news outlets focused on reports from CNN, that Sanders told Warren in a private 2018 meeting, that a woman could not win 2020 election. Sanders denied the claims. However, Warren released a statement reaffirming the claims. During Tuesday’s debate both Sanders and Warren stuck to their respective positions. Warren pointed out that she was the only candidate on stage that had beaten an incumbent Republican in the past 20 years. She added, “Look at the men on the stage – they’ve collectively lost 10 elections. The only people on this stage who have won every single election that they’ve been in are the women, Amy and me!”

The growing rift between Sanders and Warren, who had until recently refused to target one another, was seen at the end of the debate when Warren declined to shake Sanders’ hand. The tension between the two was a widely covered topic in debate reporting. Furthermore, the impact of the feud on the duo’s coverage was clearly demonstrated by peaks and troughs that occurred in tandem.

Sanders criticised Biden for his Iraq War Vote, calling it “the worst foreign policy blunder in the modern history of this country.” Biden is considered to have had a rather calm debate – although he managed to avoid dispute, he also failed to score any major points. At one point, he apologised for mistakes he made while serving as Vice President in the case of Iraq. Forgetting to mention important details also resulted in Biden having to hop back and forth during his speeches.

The Topics that Matter

Looking more closely at coverage on healthcare, defense, and the environment, we can analyse which candidates have owned these conversations recently.

News articles on US defensive policy spiked in the wake of Soleimani’s death. When Biden was called to comment on this, he became the most covered candidate on this topic.

Sanders’ defense coverage spiked on January 11 when Mike Lee, the Republican Senator, announced that he will support a legislation introduced by Sanders, which would freeze funding for any military action in Iran.Warren also vowed to block a war with Iran. Buttigieg, on the other hand, offered a more centrist response to Trump’s decision to kill Soleimani, and this was reflected in the low volume of coverage he received. 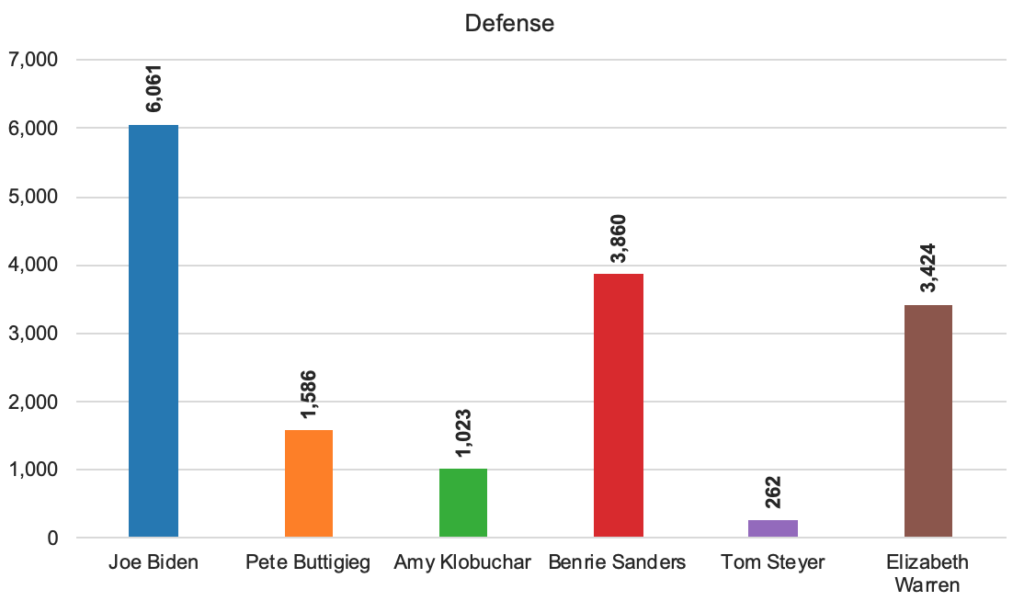 Bernie Sanders and Elizabeth Warren came out on top in terms of ‘healthcare’ coverage. Coverage on the topic, a key topic in the Iowa debate, spiked on January 14.

During the debate, Sanders argued that a “Medicare for All” plan would cost “substantially less” than the current healthcare system. On the other hand, Warren continued to show that she aims big with her healthcare plan, which is estimated to cost the country $20.5 trillion. 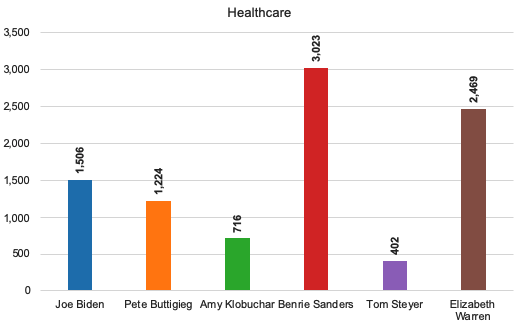 In terms of ‘environment’ coverage, Bernie Sanders prevailed, and he was most commonly mentioned in relation to climate change, environment, and environmental cleanup. This result was unsurprising, as Sanders appears to publicly discuss environmental issues more than his opponents, and has made one thing clear: “there is no middle ground when it comes to climate policy”.

In our top 10 candidates, Buttigieg receives a low volume of coverage focused on the topics of climate change, environment, and environmental cleanup in the media. Although Buttigieg has a $2 trillion climate plan that focuses on pollution reduction, it has lacked in media attention.

Steyer has unveiled a very interesting climate plan that declares climate change a national emergency, and grants climate refugees legal entry in the US. As with Buttigieg, this appears to have been covered very little. 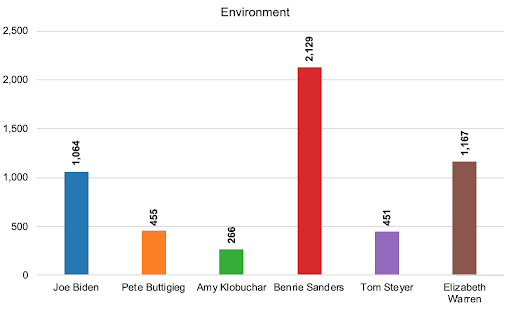 Looking forward to Super Tuesday (March 3), we decided to look at media coverage in the two most populous states – California and Texas. Whilst there are similarities compared to the national coverage, there are interesting differences in the ways the candidates are being covered. To track coverage at the state level, we monitored mentions of the candidates in print outlets using only Texan or Californian sources, respectively.

Biden maintained his spot as the most covered candidate when looking only at the Californian media. 55% of articles on the primaries mentioned him. He was followed by Sanders and Warren, who were mentioned in 40% and 34%, respectively.

There were two key peaks in coverage for Biden: during the weeks of December 2 and 16. In both cases, the peaks were focused on impeachment proceedings. The second spike was directly prompted by the sixth debate.

Coverage for Michael Bloomberg spiked during the week of December 9. Key to this spike was Bloomberg’s appearance in San Francisco, where he emphasised that combatting the housing crisis was a focal point of his campaign. In these articles, sentiment was generally positive towards Bloomberg – he received three times more positive coverage than negative. Notable ‘positive’ articles focused on his wealth, with one headline reading “Don’t reject a billionaire for president”.

Tom Steyer’s California coverage peaked following the sixth democratic debate. This peak was mainly attributed to impeachment, as Steyer announced he has championed the impeachment of Donald Trump for the last two years. Steyer says he has spent tens of millions of dollars on his “Need to Impeach” campaign. As with Bloomberg, the media in California has consistently brought up his billionaire status.

Interestingly, Buttigieg’s media coverage in California has overtaken Bloomberg’s – this contrasts the changes we have seen at a wider level.

As expected, Biden, Warren, and Sanders dominated coverage in Texas. In Texas there was particular focus on Biden with some 67% of coverage on the primaries mentioning him. In contrast, Sanders and Warren received 41% and 40% respectively. Biden’s coverage soared in mid-December compared to the other contenders as he received a spate of endorsements in Texas. These endorsements came right before Biden visited Texas on December 13.

Warren’s coverage accelerated and overtook Sanders’ when she received Julián Castro’s endorsement on January 6. Commentators speculated that Castro could be very helpful for Warren in Texas.

Coverage on Bloomberg spiked on January 11 as his campaign toured Texas. Whilst the leading candidates were campaigning in Iowa and Nevada, Bloomberg bucked the trend by focusing on Texas.

Evidently for both Biden and Bloomberg, visits to Texas paid off in terms of the attention they received in the state. Buttigieg’s coverage peaked during the week of December 16 due to the democratic debate, where he was frequently criticised by Warren and Sanders for his ‘wine cave fundraiser’.