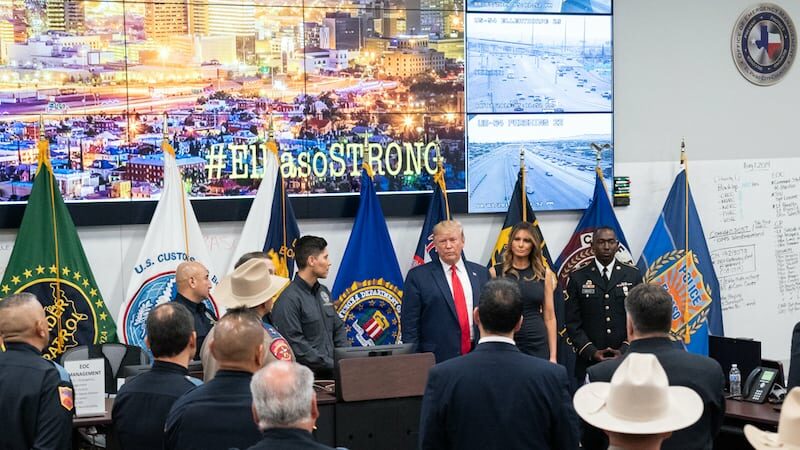 Since the beginning of the year to August 2019, there have been 11 mass-shootings in the U.S. costing the lives of 71 people and leaving 92 more injured. Two of these shootings were committed by white supremacists. The first, on April 27, was at Poway synagogue in California, and the most recent one in El Paso, Texas.

Minutes before massacring 23 people in a shopping centre, Patrick Crusius uploaded a manifesto full of hatred. Crusius labelled Latinx people as “invaders”. His aim and motives were clear; to stop the “invaders” and “defend my country”. He believed that immigration was “detrimental to the future of America.”

Crusius’ manifesto has already been compared to, and seemingly mirrors, views of leading right-wing voices like President Donald Trump and Tucker Carlson. These are public-facing people that have used terms from anti-immigration rhetoric, such as “invasion”, “invaders”, “illegal aliens”, “undocumented immigrants” freely in the past. [1] 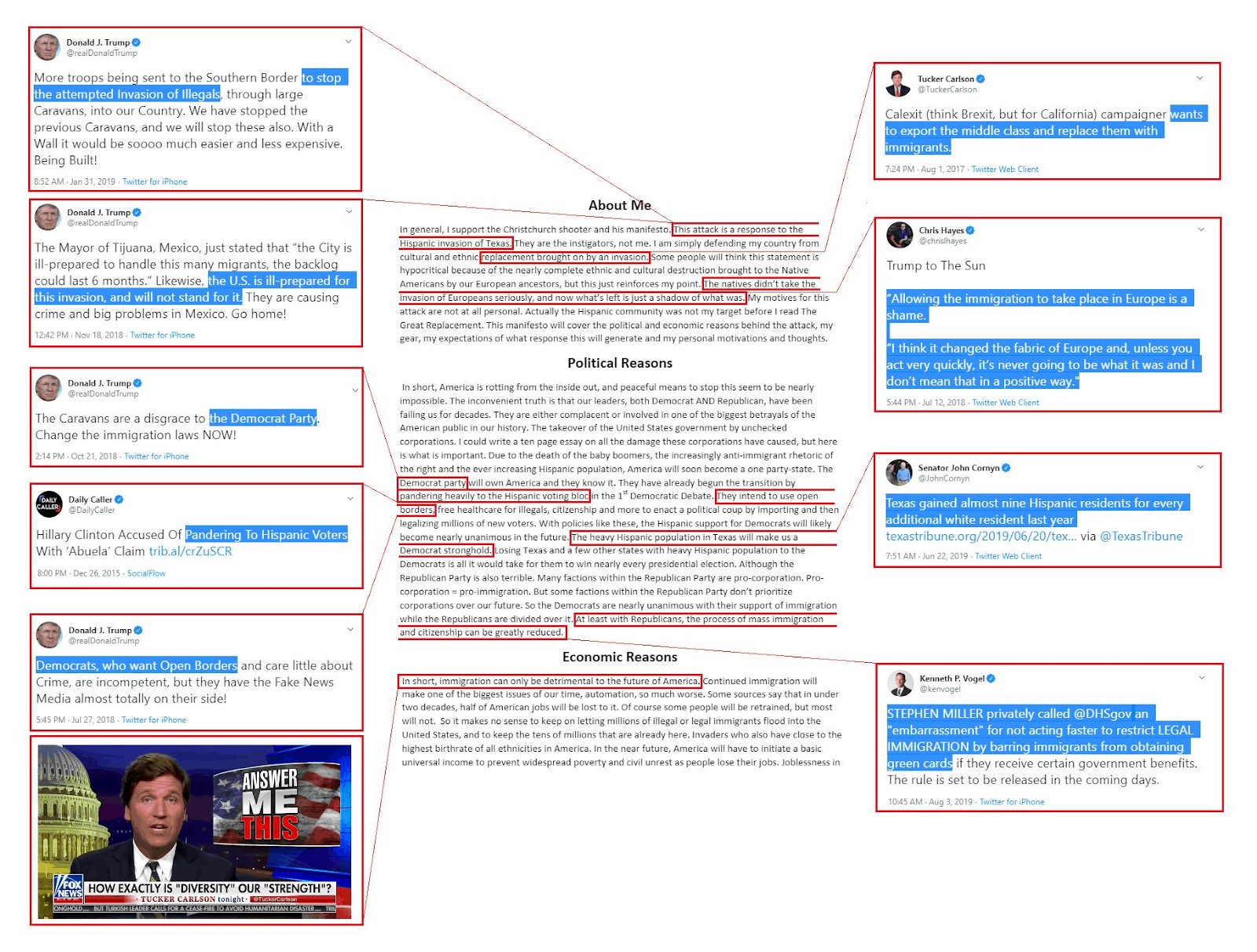 Patrick Crusius’ crimes have been called “domestic terrorism” by both local and national authorities in the US. Nevertheless, this doesn’t necessarily mean that Crusius will face charges of terrorism in court. Recently, James Alex Fields Jr., the white supremacist that drove his car into protesters at Charlottesville, was charged with murder and hate crimes, and not as a terrorist. [2]

Below is a statistical analysis of over 100,000 news items published following the attack in El Paso. It examines how often terms like “terrorism” and “terrorist” are used to describe the shooting and Patrick Crusius respectively. It shows that the media’s use of these terms is directly influenced by prominent figures’ usage of them and anti-immigration rhetoric. Further, we show that news items that refer to Crusius by name are more likely to link him, and his act, to terrorism. Finally, we examine how Trump’s anti-immigration rhetoric increased in the months leading up to this attack.

Use of the term terrorist

Our previous research has shown that the media doesn’t use language equally when describing acts of terror committed by white supremacists compared to acts committed by Islamists. Accordingly, we expect that when reporting on El Paso the media will have been unlikely to link the attack to terrorism. [3]

Globally, there were 103,464 articles reporting on the attack, from Saturday, August 3, to Monday, August 5. We also compared global media to four more refined reading lists (from news organisations with greater reach) as part of this project (see Appendix). In these four lists there were 9,962 articles mentioning the attack.

This means that only 37% of the total articles used one of the aforementioned terms. In our prior study, we found that in the aftermath of six different white supremacist terrorist attacks, only 24.6% of coverage used these terms. By comparison, 67.6% of the media coverage following the Christchurch shooting used these terms. Whilst the media’s response to El Paso seems to be an improvement from the norm, it does appear to be a step backwards after Christchurch. [3] 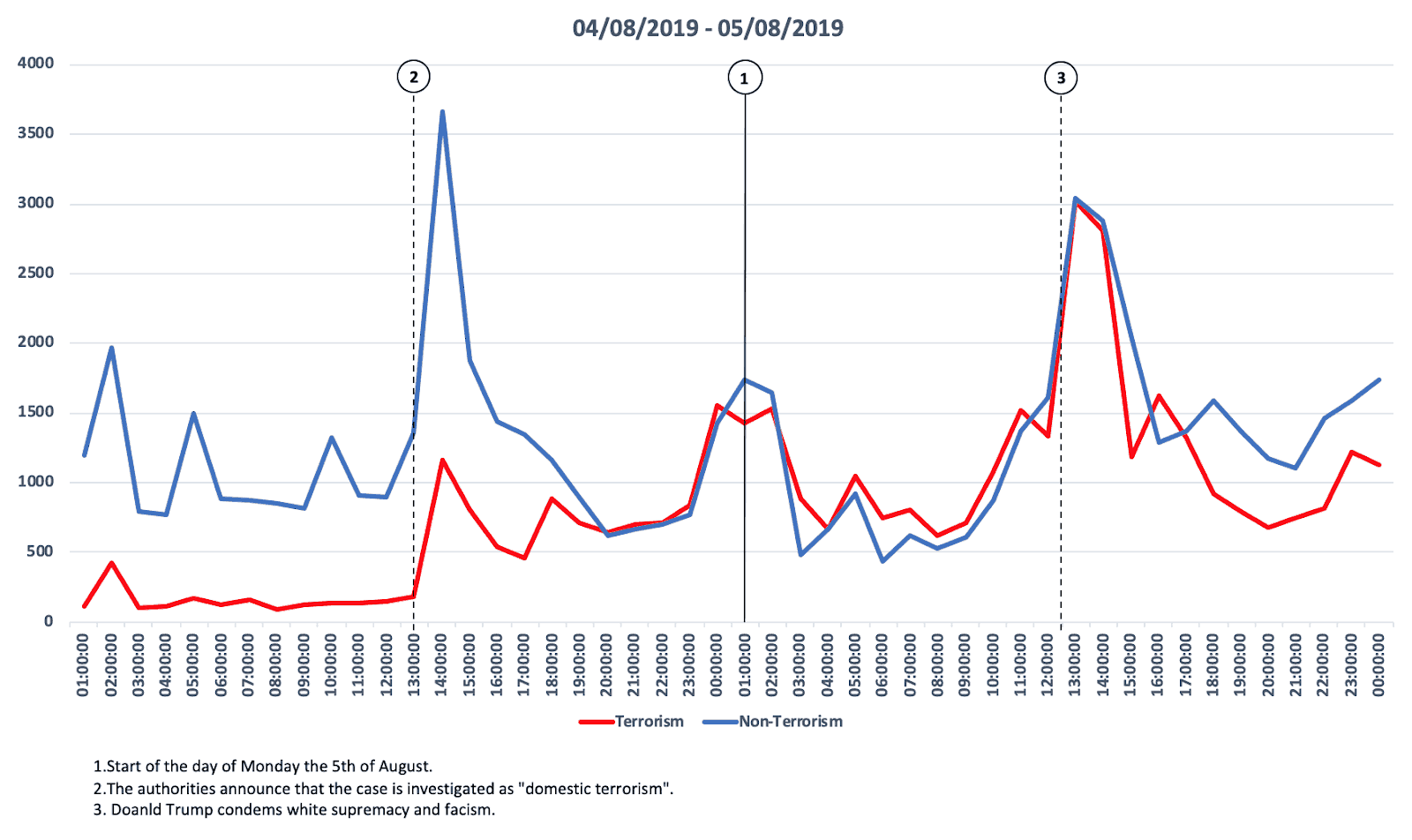 Figure 3. Number of articles reporting on the attack over time (hourly), each line represents the coverage including and excluding the terms “terrorist”, “terrorism” or “terror”.

Figure 3 compares the number of articles relating the attack to terrorism (the red line) to those that did not (the blue line).

What is apparent from the graph is that there was a delay between the initial reporting on the attack and the moment that the media began to label it as an act of terror. This will be analysed in the following section.

Saturday, August 3 (The day of the attack)

On the day of the attack (03/08), only 19% of articles reporting on the attack labelled it as an act of terrorism. This is an average of all the articles from all the reading lists used in this project, that adopted at least one of the terms “terrorism”, “terrorist”, “terror”. In the hours immediately following the attack the media was reluctant to class it as a terrorist act.

In articles that did not name the attacker, this figure dropped as low as 6.9%. On the other hand, in articles that refer to Patrick Crusius by name this percentage jumps up to 31.3%. The reason for this is unclear, but it does suggest that the media were more prepared to connect the attacker to terrorism than the mass shooting itself.

Figure 4. Coverage of the attack, numbers and percentages of articles labelling it as an act of terrorism (03/08), divided into the four reading list that were used for this project. Green is marking the highest percentage and red the lowest.

Sunday marked a turning point in the media to characterising the attack as an act of terrorism.

The media used the terms “terrorist”, “terrorism” or “terror” more than twice as frequently than on Saturday, August 3 (from 19% to 42.8%). Early in the day the authorities announced that they were treating the case as “domestic terrorism” (see figure 3). [4] From this moment onwards the media began to use the aforementioned terms more readily.

As was the case with the Christchurch attack [3], the media followed the example of the authorities in naming the event as an act of terrorism. The attack in El Paso further adds to our conclusion that “influential figures may have the ability to shift the narrative around events and topics.”

Interestingly, we see the same trends continuing as the narrative develops. Even as media classification of the shooting as terrorism increased, media about the attack was still 49.9% more likely to describe it as terrorism when Crusius was named than when he remained nameless (35.8%).

Figure 5. Coverage of the attack, numbers and percentages of articles labelling it as an act of terrorism (04/08), divided into the four reading lists that were used for this project. Green is the highest percentage and red the lowest.

On Monday, the upward trend continued. More than half (53.2%) of the articles referred to the attack as terrorism. One might attribute this further rise to Trump’s condemnation of white supremacy and racism early on Monday. [5]

Figure 6. Coverage of the attack, numbers and percentages of articles labelling it as a terrorism act (05/08), divided into the four reading lists that were used for this project. Green is the highest percentage and red the lowest.

In the aftermath of the attack, there has been a lot of discussion around whether Trump “fuelled” or “provoked” this attack or the attacker. Many have claimed that his rhetoric and comments on immigration, have encouraged far-right extremism. [6] People have pointed, in particular, to Trump’s response to one of his supporters shouting “shoot them”, in reference to immigrants, during one of his rallies in Florida last May. [7]

We looked at how often both Trump and hostile language about immigrants appeared together in global media. During the last three months, Trump’s anti-immigration rhetoric, and news reporting on it, has risen dramatically. In June, Trump appeared, in relation to offensive language towards immigrants, in 34,152 articles globally, an increase of 167% from May.

This trend fell slightly, by 11.8%, throughout. Nevertheless, in comparison to April, anti-immigration rhetoric appeared four times more often in July.

This graph shows the volume of articles, mentioning Trump alongside one of the following terms: “illegal (im)migrant(s)” “illegal alien(s)”, “(im)migrant(s) invasion”. Throughout the year, a previous significant spike occurred during January – 20,132 articles. By comparison, June and July saw 34,152 and 10,104 articles respectively, a massive increase.

The media seemed unwilling to label this attack as terrorism, especially before the authorities announced that they were treating it as a case of “domestic terrorism”. This further adds to our belief that prominent figures bear a responsibility in correctly labelling terrorism.

An unexpected finding from this study was that the media are more likely to refer to an attack as “terrorism” in articles in which they use the attackers name. On average, between Saturday, August 3 and Monday, August 5, 48.8% of the articles mentioning Crusius used a term that linked the attack to terrorism. In comparison, articles which did not name Crusius only did this on average 28% of the time.

Our data shows that Trump’s anti-immigration rhetoric spiked massively during the last two months. The El Paso manifesto echoed a vocabulary that Trump (amongst other public and political figures) spouted increasingly in June and July. Whilst we cannot directly conclude that Trump triggered this attack, it is worth considering whether it would have occurred without his vocal anti-immigration stance.

US Tier One Sources: