Which organizations are most active on LGBTQ+ issues?

In celebration of Pride Month, we have released new data that details which publications (US Tier 1+US newspapers) have been the most active in covering LGBTQ+ related issues and topics across the United States from May 1, 2021 to May 31, 2022. This study also takes a look into which 10 topics relating to LGBTQ+ received the most media attention over the same period, and some of the headlines driving that coverage.

“Embracing LGBTQ+ rights and culture is essential to creating a more diverse and open world, and the media plays a huge role in keeping the issues impacting the LGBTQ+ community in the public eye,” said David Benigson, CEO and Founder, Signal AI. “With that in mind, in honor of Pride Month 2022 we wanted to look back at which media organizations have been the most active in terms of LGBTQ+ related coverage and also wanted to drill down into the biggest LGBTQ+ topics that have been generating headlines.” 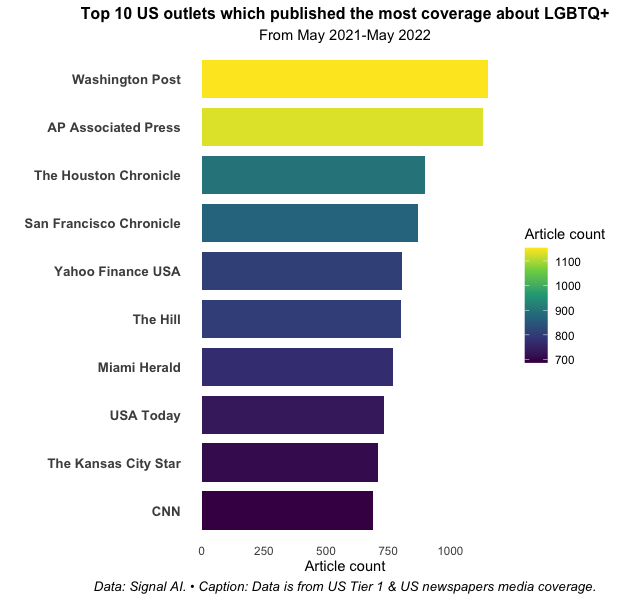 The Washington Post and Associated Press published the most coverage relating to LGBTQ+ over the past 12 months.

New census data showing that transgender people are three times as likely as cisgender people to go hungry was among the top articles in The Washington Post. The data revealed that “more than a quarter of transgender adults in the United States reported sometimes or often not having enough to eat, compared with just 8 percent of cisgender adults. Trans people of color were especially vulnerable. Nearly 36 percent experienced food insecurity.”

Associated Press reported on health disparities and lack of equitable access to care for transgender adults. The story echoed a scientific report – released in July last year – that found “higher levels of heart disease among transgender and gender diverse people which are linked to the stress of experiencing discrimination and transphobia at personal and societal levels.” 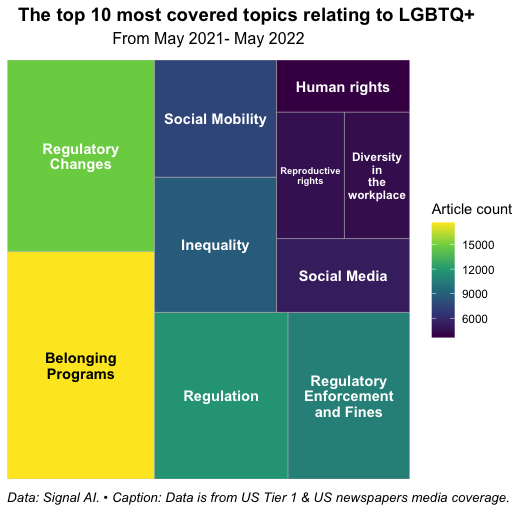 Belonging Programs was the most discussed topic relating to LGBTQ+ over the past 12 months (17,675 articles). Deloitte defines a culture of belonging as “an environment that supports all three elements of comfort, connection, and contribution.” Belonging programs are the next phase of diversity and inclusion programs. According to authors Mollie West Duffy and Liz Fosslien “diversity is having a seat at the table, inclusion is having a voice, and belonging is having that voice be heard.” This topic looks at news about organizations’ efforts to make people feel included. LGBTQ+ youth avoiding sports in schools due to bullying and fears of discrimination was one of the most discussed issues.

A new law in Florida banning lessons on sexual orientation or gender identity until third grade, and a Texas directive to investigate parents of transgender children who receive gender-affirming medical care were amongst the most discussed regulatory changes. The disappearance of books on race and sexuality from Texas schools was also covered.

A transgender woman in Ukraine fearing for her life and facing a “war within a war” due to transphobia and discrimination in the country was one of the most shared articles on the topic of Inequality. 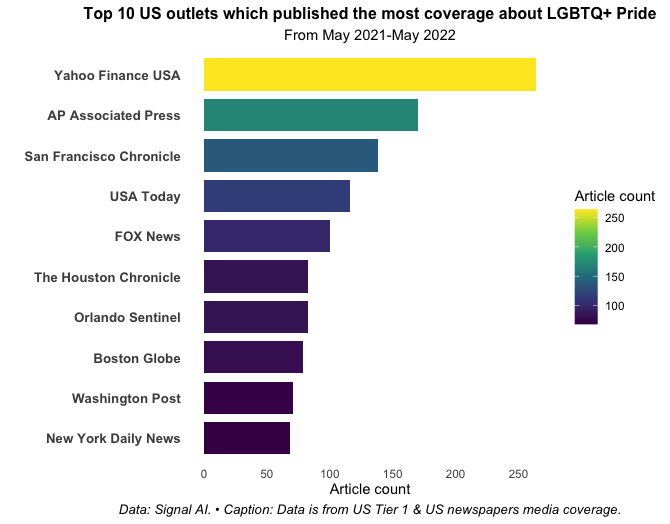 Yahoo covered Exxon’s ban on the LGBTQ+ flag from being flown outside its offices during Pride month, and the subsequent employee backlash: workers refused to represent the organization in the Houston parade.

The most shared article on LGBTQ+ Pride in the last 12 months was the story of a Texas teacher who could lose her job after standing up for gay pride symbols in a school. Similar stories of teachers facing backlash – and even threats – in Ohio and California were widely covered. 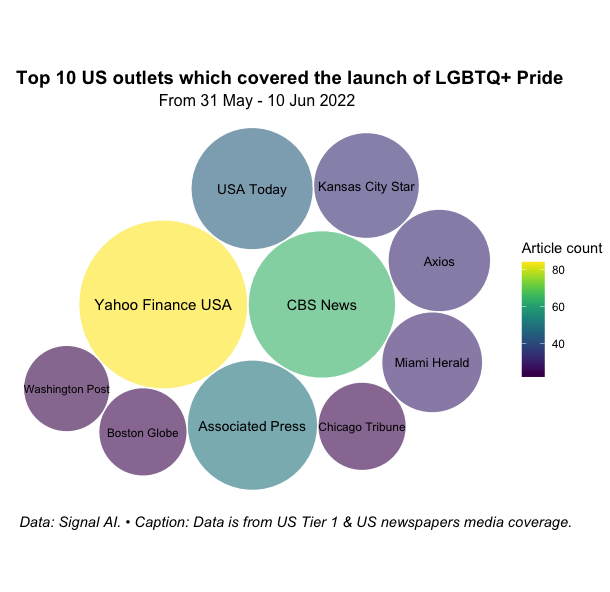 Yahoo and CBS News were the top US outlets covering the launch of Gay Pride Month 2022.

One of the most relevant articles during this period was on companies whose political donations contradict their support of LGBTQ issues. The article, published on Yahoo, highlights that many companies “end up sending mixed messages – declaring their commitment to their LGBTQ+ employees and customers, especially during June, but donating money to politicians who actively oppose gay rights, trans medical care and more.”

One of the top articles on CBS coverage was Pride Month “calls for ‘unity’ to push back against new legislation”.

President Joe Biden was most associated with the topic LGBTQ+ in May and June 2021, and in April this year. This data was gathered by using the Signal AI platform to judge the proximity between an entity (a person or organization) and a topic.

In May, the restoration of healthcare protections for transgender people in the US drove most of the coverage. In 2021, he also officially recognized June as LGBTQ+ Pride Month. Women’s rights groups criticized his administration in April this year for “ignoring the rights of female athletes”, amid a nationwide debate over transgender women in sports.

Last month, we published an analysis on LGBTQ+ media sentiment towards prominent companies and politicians. To know more, see “How the media covered the politicians and organizations associated with LGBTQ+ rights“ 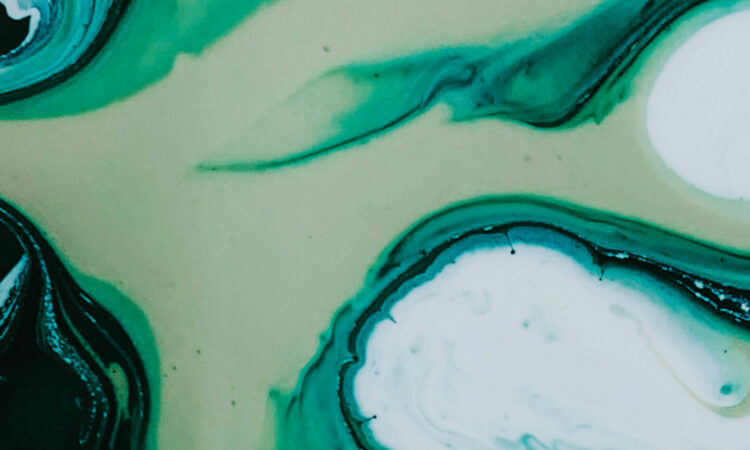 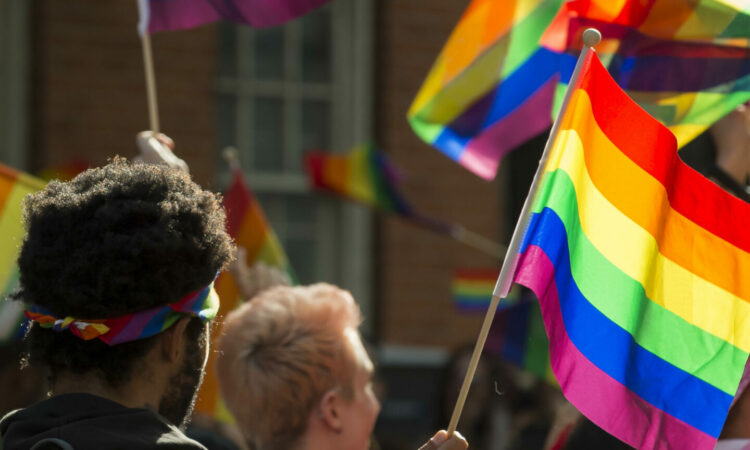 US governors Abbott, Desantis and Hutchinson Lead in Negative LGBTQ+ Media Sentiment
Read more
We use cookies on our website to give you the most relevant experience by remembering your preferences and repeat visits. By clicking “Accept”, you consent to the use of ALL the cookies. However you may visit Cookie Settings to provide a controlled consent.
Customise SettingsAccept
Manage consent