Use cases Signal AI augments decision making across a range of use cases.
PR & Comms Strategic Comms tool using AI to power your PR strategy
Why Signal AI? Innovation is at the core of the Signal AI platform.
Customer Stories See why we’re trusted by organizations across the globe to help them make informed and confident decisions.
Resources Browse our webinars, eguides and whitepapers to discover trends, insights and relevant information on how to use AI to augment your decision making.
Blog Read our industry-leading blog and keep up with the latest developments in AI, media intelligence, decision augmentation and more.
Latest resource

Covid-19 and the case for ever lower interest rates

“We Just Witnessed The Fastest Stock Market Correction on Record” was Friday’s attention grabbing headline, after the S&P 500 dropped more than 10% in just six days. Comparisons to 1987’s Black Monday, the Great Depression and the Great Financial Crisis were (and continue to be) everywhere. It is tempting to dismiss stock market gyrations as isolated incidents that excite the financial community while the rest of the world moves on. However, in this case the Coronavirus truly is a “black swan” event befalling the real economy. Already, the effects have been tangible: quarantines, empty shelves in supermarkets due to stockpiling, and cancelled mass events.

Estimates of the potential impact on GDP growth are highly uncertain and should be taken with not just a pinch but a shovel of salt. But a knock to global GDP growth of one to two percentage points is probably not too far off the mark. As a result, Europe and the US are highly likely to drift into recession. In light of this, the shift in market sentiment to “risk off” – which drove the US 10-year treasury yield to an all-time low of 1.03% – is understandable.

A temporary dent to economic growth or the beginning of a crisis?

Closely linked to the question of how bad it’s going to be is how long any downturn will last. Broadly, there appear to be two ways the Covid-19 pandemic could play out. In the less severe scenario, at worst we would be in for two quarters of negative GDP growth, i.e. a technical recession, with a strong bounce in activity once the virus is under control. Afterwards, the world economy would be back on track. The other, more worrisome, outcome would see a prolonged global slump. In such a scenario Covid-19 is the black swan that derails the global economic system from its current growth trajectory to a significantly lower one.

There is little doubt that in the latter scenario, central banks would once more respond with extraordinary monetary stimulus. Those that have room to do so will cut rates, and quantitative easing will certainly be on the menu in all developed economies. Yet another extended period of rock-bottom interest rates would follow a severe and lasting Covid-19 induced downturn. But what if economic growth picks up swiftly once it is clear that the virus has been contained? One could argue that in such a scenario – where the shock is transitory – central banks shouldn’t react at all. Policymakers are hence facing a conundrum: act now and with force at the risk of over-reacting to a temporary shock, or adopt a wait-and-see approach that would mean too little too late if we are indeed headed towards a significant economic crisis?

How will central banks respond?

Given how frail the recovery from the 2008 financial crisis has been and how vulnerable the global economy has recently looked, one would expect action from the major central banks at their upcoming policy meetings in March. Like its response in the aftermath of the Brexit referendum in 2016, the Bank of England may decide on a precautionary 0.25% cut. However, with the five-year swap rate falling to 0.44%, markets anticipate that the BoE might go further. EUR swap rates have reacted less strongly; unsurprising given how little room to manoeuvre the ECB has.

More remarkable is the sharp drop in US swap rates. Currently, the Fed Funds target rate is between 1.50% and 1.75%, whereas five year swap rates have now dipped below 0.9%. While markets had already been anticipating a rate cut by the Fed before the coronavirus crisis intensified, they are now expecting a lot more than that: short term interest rates are currently projected to fall below 0.6% by end of this year. Against this backdrop, it is worth recalling that the five year swap rate was trading around 1.75% only two months ago, and over 2.5% a year ago. By now dropping to such low levels, markets are suggesting that the Fed’s response will not only be forceful, but also permanent. If you assume that the short-term equilibrium real interest rate is 0%, the current five year swap rate implies average inflation to languish below 1% in the medium term – quite a pessimistic outlook. 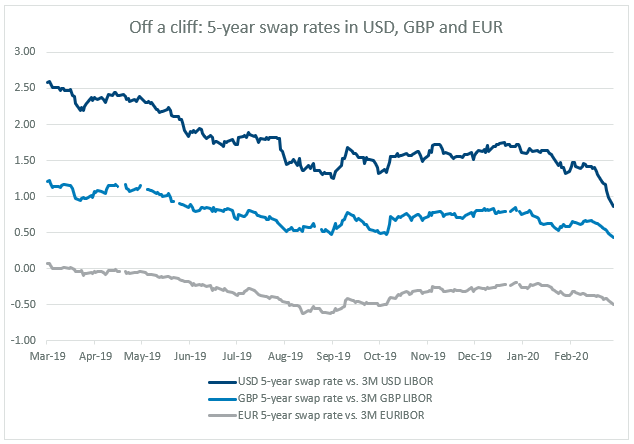 But that might be a misinterpretation. Investors have shifted from equities into bonds and US yields had by far the most room to fall; hence the more pronounced drop in USD swap rates compared to those in sterling or euro. It is astonishing how demand for safe assets keeps pushing market interest rates ever lower. That said, if the economy’s fortune doesn’t turn out to be that bad after all and sentiment turns more optimistic again, USD swap rates are also likely to rebound the most. Considering this, USD borrowers may have just been offered a decent opportunity to lock in their interest rate exposure. Unfortunately, this could also amount to catching a falling knife.

We're always innovating, so we use cookies to keep improving our website and your experience. By continuing to browse, you agree to our use of cookies.