Use cases Signal AI augments decision making across a range of use cases.
PR & Comms Strategic Comms tool using AI to power your PR strategy
Why Signal AI? Innovation is at the core of the Signal AI platform.
Customer Stories See why we’re trusted by organizations across the globe to help them make informed and confident decisions.
Resources Browse our webinars, eguides and whitepapers to discover trends, insights and relevant information on how to use AI to augment your decision making.
Blog Read our industry-leading blog and keep up with the latest developments in AI, media intelligence, decision augmentation and more.
Latest resource

Central banks: Who will be next to cut interest rates?

Global central banks decided against joining the Federal Reserve’s rate cut this week, but it is only a matter of time before policymakers elsewhere decide to add stimulus too. Here’s ING’s latest thinking on the path for global policy rates

Who will be next to cut interest rates? 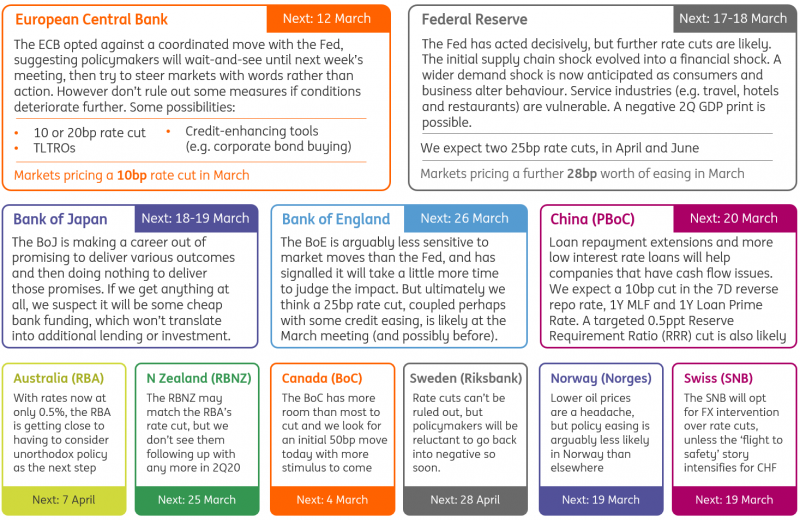 The Federal Reserve has cut by 50bp – who will be next?

The Federal Reserve has delivered a punchy 50 basis point emergency rate cut, and we suspect there could be more to come.

What started out as a supply chain shock for the US has morphed into a financial shock, as markets recognise that the coronavirus will have a much broader impact on the global economy. The concern now is that the fear factor surrounding the outbreak will change corporate and consumer behaviour, prompting a wider demand shock too. This is most likely through the service sector of the economy with travel, hotel accommodation, restaurants and leisure-related sectors looking vulnerable. Add in the prospect of significantly weaker export performance and a negative second quarter GDP print is looking a distinct possibility.

While we doubt rate cuts will make a meaningful boost to aggregative demand, they may help to mitigate some potential strains in the financial system and lift sentiment. We’re pencilling in two further 25bp rate cuts for the second quarter, giving a total of 100bp worth of easing in the US.

There had been hopes among investors that the Fed’s bold move would be accompanied by wider coordinated action. That hasn’t happened yet, with some of the other major central banks signalling a preference to wait a little longer to gauge the fallout.

But further action is inevitable from central banks, and here we take a look at who might be next in line to cut rates.

The Federal Reserve is covered by James Knightley

Under the leadership of ECB President Christine Lagarde, the bank looked less sensitive to financial market developments than it did under her predecessor Mario Draghi. There has been a growing awareness of the adverse effects of the ECB’s unconventional measures, lowering the likelihood of, or at least the willingness for, additional monetary policy easing.

The ECB opted against a coordinated move with the Fed, signalling that policymakers would prefer to wait-and-see until next week’s official meeting, and then try to steer markets with words rather than action. It is currently hard to tell whether words will really be enough or whether the ECB feels forced into some action. A lot will depend on how the virus and financial markets evolve in the coming days.

The ECB is facing a challenging situation in which the staff projections, which are based on the no-policy-change assumption, and the still relatively benign macro data (cut-off date for the projections was last week), will be more optimistic than the gut feeling of many ECB officials about the possible economic impact of the coronavirus. This combination of fear and uncertainty, and the root problem originating clearly outside of the ECB’s reach, once again illustrates the ECB’s dilemma: it has run out of ammunition.

Still, we shouldn’t rule out some moves if the situation deteriorates. A 10 or 20bp rate cut is possible, combined with a tweaked tiering facility, some new (or adapted) Targeted Longer-Term Refinancing Operations, a new credit enhancing instrument for SMEs or a shift of quantitative easing purchases towards corporate bonds.

The European Central bank is covered by Carsten Brzeski

People’s Bank of China is covered by Iris Pang

The rise in sentiment after December’s election was enough to convince the Monetary Policy Committee not to lower interest rates in January. Policymakers had been looking for a modest growth rebound in the first half of this year. But if the coronavirus were to create a broader demand shock in the UK, that could change. Comments from outgoing Governor Mark Carney indicate the committee wants to wait for more data before deciding how to act.

Like the ECB, policymakers are arguably less sensitive to financial market moves than the Fed, and will be listening closely with their agents to gauge the extent of the fallout. However, with the UK government warning that the number of cases is likely to rise, we think policymakers will ultimately cut interest rates to 0.5% later in March, and like the ECB, may also look towards credit easing measures. A negative second quarter growth figure now looks like a possibility.

The Bank of England is covered by James Smith

The BoJ is making a career out of promising to deliver various outcomes and then doing nothing to deliver those promises. We put recent comments related to the coronavirus by central bank Governor Haruhiko Kuroda into that category. If we get anything at all, we suspect it will be some cheap bank funding, which won’t translate into additional lending or investment.

The Bank of Japan is covered by Rob Carnell

We had been looking for a 25bp cut by the BoC this week as coronavirus worries increasingly weigh on the economic outlook, but with the Fed having moved more aggressively, the pressure is on the BoC to follow suit. The BoC has more room than most central banks to provide support to the economy and financial markets (the Overnight Lending Rate is at 1.75%) and in the past hasn’t been afraid to take bold steps. We expect an additional 50bp of rate cuts in subsequent months.

The Bank of Canada is covered by James Knightley

Sweden’s open economy is vulnerable to the wider supply chain disruption. Even so, policy easing is not necessarily inevitable. A rate cut is possible, but it would come only weeks after policymakers lifted the deposit rate to get out of negative territory. The Riksbank will be reluctant to go back there so soon, and don’t forget the next meeting isn’t until late-April, by which time there may be light at the end of the tunnel.

The Riksbank is covered by James Smith

Lower oil prices are a headache for the Norges Bank, although don’t forget that breakeven prices in the oil industry are still lower than current market pricing, according to the central bank. Like everywhere else monetary easing is possible although barring a sharp appreciation in the krone, it’s too early to conclude a rate cut is likely at the 19 March meeting. Don’t forget the Norges Bank has been a standout hawk in the G10 space over the last 12 months.

The appreciating Swiss franc is a problem for the Swiss National Bank, which finds itself forced to intervene in FX markets to avoid deflation. The question is what can policymakers do if the flight-to-safety persists? If pressure becomes too great such that invention runs out of road, the SNB could lower its rate to -1% if it has to. This, however, is not our base case, and we think policymakers will want to avoid that.

The Swiss National Bank is covered by Charlotte de Montpellier

Australia cut rates this month, a big turnaround from its upbeat assessment in February. With rates now at only 0.5%, the Bank is getting close to having to consider unorthodox policy as the next step.

The Reserve Bank of Australia is covered by Rob Carnell

The Reserve Bank of New Zealand may match Australia’s rate cut this month, but we don’t see it following up with any more in the second quarter, as inflation and growth remain reasonable.

The Reserve Bank of New Zealand is covered by Rob Carnell

We're always innovating, so we use cookies to keep improving our website and your experience. By continuing to browse, you agree to our use of cookies.